Apple has added a nice feature to the iCloud Photo Library section of iCloud.com. Users can now manually upload photos to the service.

Previously, users could only view, download, and delete images taken from their iOS devices.

Still in beta, users can select photos from their Mac or PC to upload to the site. They will then appear on all of their associated iOS devices. They can also be shared with other users thanks to iCloud Photo Sharing.

Just to note, you can only upload .jpg images to the site. Video uploading isn’t supported as of yet. Click the “Upload” button located on the top right side to select photos.

Apple activated the feature on the developer beta edition of iCloud.com earlier this month.

The photo-sharing tool officially arrived with the introduction of iOS 8.1 in October. It can be activated by heading to the iCloud portion of the Settings menu on your iOS device.

Earlier today, Apple also rolled out some improvements to the iWork portion of the iCloud site. Along with adding support for a number of new languages, users can now take advantage of 50 new font choices.

For other news today, see: Square will accept Apple Pay beginning in 2015, Watch your yard Blossom with this new smart watering controller for iPhone, and There are No Limits in the latest Need for Speed game from Electronic Arts. 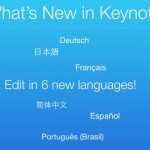 Apple's iWork for iCloud suite now supports additional languages and fonts
Nothing found :(
Try something else