You are using an outdated browser. Please upgrade your browser to improve your experience.
Connected Car
by Brent Dirks
February 19, 2015

While there are more than a few skeptics (myself included) who truly doubt Apple is planning to build an electric car, a new report from 9to5Mac should convince you that something big is going on in Cupertino.

The report takes a comprehensive look at some of the key players working on the project. Apple has scooped up a number of employees from companies like Tesla, Ford, Mercedes-Benz, and others.

Many Apple employees have also been reassigned to the project.

And it’s plainly obvious that Apple has bigger plans than just improving CarPlay. A number of the employees highlighted by the site have experience with automotive hardware instead of software.

News of the project was first broken by The Wall Street Journal late last week. According to that story, Apple has “several hundred” employees working on an electric vehicle with the code name “Titan.” Former Ford executive and current Apple VP Steve Zadesky is reportedly leading the team.

So what does all of this really mean? At this point, not a whole lot. Apple seems to be at least exploring something in the automotive sector.

But as we’ve seen with the long and winding road of the mythical standalone television set, just because Apple is researching something, that doesn’t mean any product will ever surface.

I truly doubt that an Apple-branded car will hit the market anytime soon. But with billions of dollars in the bank, it shouldn’t come as a huge surprise that Apple is looking in a number of directions for its next big thing.

For other news today, see: IFTTT introduces three new automated task apps, Do Button, Do Camera and Do Note, Inbox by Gmail is quietly sent to iPad, and Sennheiser Momentum Wireless headphones offers incredible sound without all the plastic. 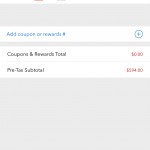 At least for Staples, Apple Pay is a hit in an unexpected place

Samsung finally gets serious about mobile payments and purchases Apple Pay competitor LoopPay
Nothing found :(
Try something else