You are using an outdated browser. Please upgrade your browser to improve your experience.
Connected Theater
by Joe White
April 6, 2015

Before now, we've heard that an incoming update for the set-top box is expected to be unveiled at this year's WWDC in June, alongside the next-generation iPhone 6 and iPhone 6 Plus handsets. Moreover, this new Apple TV is said to borrow many features from Cupertino's iOS mobile operating system, such as a built-in App Store, support for Siri, a software development kit (SDK), and around 8GB of on-board flash storage.

Now, however, a report from BuzzFeed claims that support for 4K streaming – another feature expected of Apple's next-gen set-top box – isn't going to reach our living rooms this year. Citing an unnamed source “familiar with Apple's thinking,” BuzzFeed notes that even though Netflix, Amazon, and YouTube are offering ultra-HD content, 4K streaming isn't Apple TV-bound.

The source reportedly told BuzzFeed, “4K is great, but it’s still in its infancy.” The report then goes on to add that 4K streaming is arguably an “unnecessary” addition to the Apple TV platform at this point.

Of course, this comes as surprising news – especially considering that Apple's iPhone 6 and iPhone 6 Plus are capable of recording and playing 4K video, thanks to the devices' camera module and the Apple-designed A8 chip. Furthermore, a range of content providers are indeed offering ultra-HD content for consumers, making 4K seem like a natural addition to the set-top box. However, if BuzzFeed's source has it right, we're not going to be streaming 4K content from our iPhones to an Apple TV anytime soon. 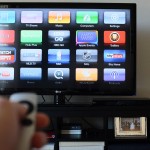 'We want your TV shows, but you have to provide the streams,' says Apple
Nothing found :(
Try something else