You are using an outdated browser. Please upgrade your browser to improve your experience.
Accessories
by Joe White
April 16, 2015

Jawbone has unveiled a brand new, next-generation fitness tracker, called Up4, which allows users to both track their fitness and perform mobile payments. There’s also a second new band that Jawbone has announced, called Up2, and this designed to outright replace the Up24 fitness tracker which the company launched back in 2013.

The Up4 offers users Jawbone’s usual array of fitness tracking features, including heart-rate tracking and sleep analysis, and in this respect it’s much like the previous-generation (and long delayed) Up3. Unlike Jawbone’s previous fitness trackers, however, the new Up4 features a built-in NFC chip, and this allows wearers of the band to pay for purchases using mobile payments stations. It seems, though, that you’ll need an American Express account in order to configure mobile payments with your Up4: if you already have an AmEx card, this of course won’t be a problem; if, on the other hand, you don’t have an account, Up4 users are advised to sign-up for a card in order to potentially receive instant approval.

Besides its support for mobile payments, though, Jawbone’s Up4 is much the same as Up3. It’ll retail for $199 later this summer, which is $20 more than the price of the Up3.

Jawbone’s Up4 and its support for mobile payments.

Jawbone’s Up2, however, is priced at $100. Much like the Up3 and Up4, it features fitness tracking, sleep analysis, food logging, and Jawbone’s Smart Coach (which provides personal goals and targets for users of the band). It also offers a full week of battery life, too, as well as smart, vibrating notifications which users can configure as alarms. Jawbone’s Up2 is indeed replacing the Up24 band, and the new Up2 is 45 percent smaller; it also features an adjustable band that owners can tighten or loosen.

Of course, as a wearable device Jawbone’s new offering will face stiff competition from the Apple Watch, which also offers health and fitness functionality alongside support for mobile payments. Jawbone, however, has price on its side: its most expensive, high-end band retails for $199, while prices for the low-end Apple Watch Sport start at $349.

See also: Foursquare checks in with new features for iPhone and Apple Watch, Do more in less time with IFTTT’s Do Button and Do Note apps for Apple Watch, and Misfit for iOS goes 2.0 with new design, Flash integrations and more. 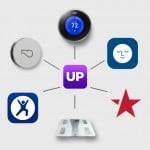 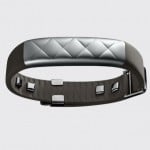 The Jawbone UP3 fitness tracker won’t be under your Christmas tree
Nothing found :(
Try something else