You are using an outdated browser. Please upgrade your browser to improve your experience.
iPhotographer
by Brent Dirks
June 10, 2015

Selfie fans rejoice. Some interesting code hidden within iOS 9 is strongly suggesting that the next-generation iPhone may offer a significant upgrade in the front-facing camera.

That information was first spotted by developer Hamza Sood.

According to the code, a future front-facing camera could support 1080p video capture, 240fps slow motion video, panoramic image capture, and even a flash. Currently, the front-facing camera of the iPhone 6 and iPhone 6 Plus can only capture relatively low-quality 1.2-megapixel photos and record 720p HD video.

All of those features are standard on the more powerful rear camera of Apple’s latest handsets, but adding them the front could take selfie taking to even more absurd heights.

If Apple’s previous release schedule continues, the “iPhone 6s” and “iPhone 6s Plus” could hit the market sometime in September.

Previous reports have indicated that the new handsets will mostly focus on under-the-hood upgrades, like with previous “s” cycle years. Along with increasing the RAM to 2GB, Apple could add Force Touch technology found on the Apple Watch, and even offer a rose gold and pink color option.

As for iOS 9, Apple released the first beta version to developers after Monday’s WWDC keynote. A public beta version is planned for July while the software should hit the market sometime this fall, usually around the introduction of new iPhones.

While I only use the front camera on my iPhone 6 Plus for FaceTime calls, the rise of the selfie gives Apple a great opportunity to get the world’s most popular camera into the hands of more consumers. Even so, I don’t exactly know how a front-facing flash would work without blinding you in the process of selfie taking. But we may get to find out soon. 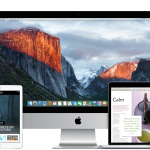