You are using an outdated browser. Please upgrade your browser to improve your experience.
iPhotographer
by Brent Dirks
October 26, 2015

While the Live Photos feature on the new iPhone 6s and iPhone 6s Plus is a great addition for photographers, there is a downside.

I’ve been able to capture a number of fun and memorable Live Photos since purchasing my iPhone 6s Plus. But as many fun shots as I’ve taken, there are also a number of times I’ve had the featured turned on when all I’ve really wanted to do is just capture a quick photo and nothing more.

But a new app which recently landed on the App Store, Lean, is designed to help fix that problem while reclaiming space on your iPhone. It strips out the video portion of the Live Photo and leaves just the image.

The app also keeps all of the important metadata for each photo – like EXIF, GPS, and creation date – intact.

The app will even inform you how much space you’ve saved converting the Live Photo to a simple image.

As a nice touch, after the app does its work, it will tell you exactly how much space you’ve saved on your device.

Designed for the iPhone, Lean can be downloaded now on the App Store for free. This is an app that every iPhone 6s or iPhone 6s Plus user needs, especially those with the smaller 16GB version.

Developer Tiny Whale is also behind Lively, an app that allows users to export Live Photos into an animated GIF or movie. It can be downloaded now on the App Store for free and is designed for the iPhone. You’ll be able to convert three Live Photos for free. With an in-app purchase of $1.99, you can unlock unlimited conversions.

For other app news today, see: Leonardo’s Cat will bring family fun in an invention puzzler, Stomp out monsters instead of moles in Whack Magic, and Save and share passages from paper books with Quotle. 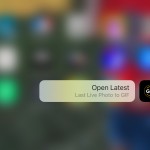