You are using an outdated browser. Please upgrade your browser to improve your experience.
tvOS App Store
by Brent Dirks
November 13, 2015

Just like previous generations, the new Apple TV provides a nice way to view a huge number of great, and not so great, movies. But then there’s always that important question – what do I really want to watch?

As you can probably tell by the app’s name, Decyde is looking to make that question a little easier to solve. 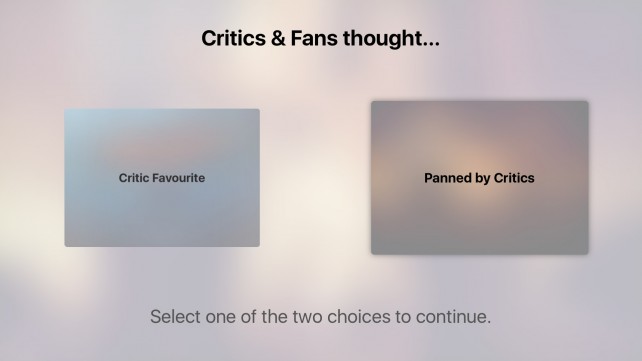 You’ll answer a few questions for the app to help pick out three movie choices.

Getting started with the app is simple. To begin, there are two different ways to interact with Decyde. First up, if only one person is making a selection, you can use the Siri Remote.

You’re then given four to five questions about your taste in movies. Each and every time you use the app, it will offer different questions. It starts out simple, as for example, you’re asked whether you want to watch or comedy or drama.

The questions get more specific, though, as Decyde asked me things like if I would rather watch Bill Hader or Paul Giamatti.

After all the questions, instead of just one “perfect” answer, users are given three different movie selections. When you pick a winner, the app will show you a quick summary about the movie and exactly when it will end if you started watching now. 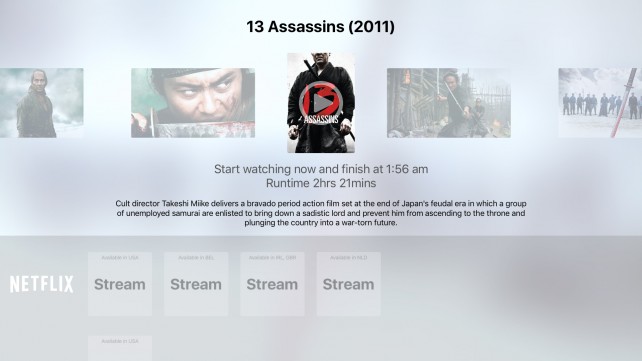 Decyde will show you exactly how you can watch the movie through your Apple TV.

My favorite part is that it will show you all the available ways to watch the film. Along with purchasing or renting it through iTunes, Decyde let me know that I could also stream it through the HBO Now TV app. It can also search through other sources like Hulu and Netflix. As a nice touch, it will automatically prioritize selections that you can watch using what apps you have installed on your Apple TV.

The only interesting quirk you’ll have to watch out for is that Decyde shows Netflix availability from a number of countries. For example, the app shows that “Beetlejuice” is available to stream in Italy, but not the United States.

If more than one user wants to get in on the fun, everyone will need to download the movie tracking Gyde app. Decyde will take into account you’re different watch lists and favorite movies to generate the suggestions.

You can download Decyde on the Apple TV App Store now for free. The companion Gyde app is designed for the iPhone/iPod touch and is also free.

I really enjoyed getting to use the app, and I will definitely fire it up before the next movie night at my house.

For other recent Apple TV news, see: Top five entertainment apps missing from your Apple TV, Don’t hold your breath for an Apple TV Remote app update, and App discovery on the Apple TV still isn’t where it should be. 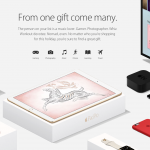 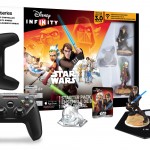 Disney launches a 'Star Wars' Infinity 3.0 pack for the new Apple TV
Nothing found :(
Try something else