You are using an outdated browser. Please upgrade your browser to improve your experience.
iOS Reading
by Brent Dirks
December 8, 2015

The Apple News app is offering a notable new feature starting with iOS 9.2, which officially arrived to the public earlier today.

As first noted by Re/Code, the stock app will now highlight a curated list of top stories that will be displayed to all users at least a few times daily. The stories will be selected by Apple editors.

That’s a bit of a change from when the app launched with iOS 9 back in September. Originally, Apple played up the different personalization options for readers that would allow users to select where they’d like to see their news from. 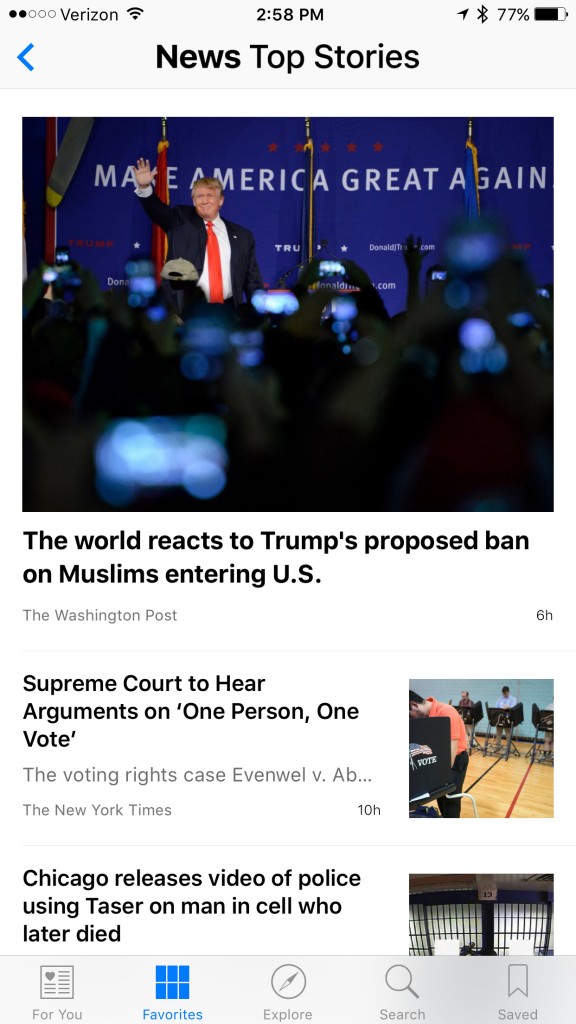 When starting the app for the first time, users can select their favorite topics and publishers to receive content from. You can also share articles with friends or save them to read offline later. Thanks to iCloud syncing, you can start reading a story on one iOS device and pickup exactly where you left off on another.

Apple has also added a new feature in the app for publishers. ComScore integration will allow the different news outlets to receive advertiser credit for the content views.

In a bid to garner quick acceptance from media outlets, Apple is allowing publishers to keep 100 percent of the revenue from ads they sell in the app and 70 percent of revenue when Apple sells the ads.

Generally, publishers have seemed to be pleased with the app. Some, like Wired magazine, have even provided early and exclusive content to readers.

Adding a top news section definitely makes sense, and I think it should help make News even better. What other changes should Apple make to the app?

For other news today, see: Apple’s hits and misses in 2015, our hopes for 2016, The Remote app now works with the new Apple TV, and Apple retail stores now selling Devialet’s high-end Phantom speakers.

Apple Maps takes the lead over Google Maps on iOS
Nothing found :(
Try something else