You are using an outdated browser. Please upgrade your browser to improve your experience.
App-dicted
by Brent Dirks
February 1, 2016

If you don’t have a ticket for Super Bowl 50 on Sunday, you’ll need to shell out almost $3,000 just to get in the door. But if you are lucky enough to attend the game at Levi’s Stadium in Santa Clara, California, make sure to bring your iPhone.

The NFL has just released the aptly named Super Bowl Stadium App on the App Store. And it looks to be a great companion for anyone attending the game. Before the game, you take a look at different transportation options to the stadium and see what’s happening at the GameDay Fan Plaza. 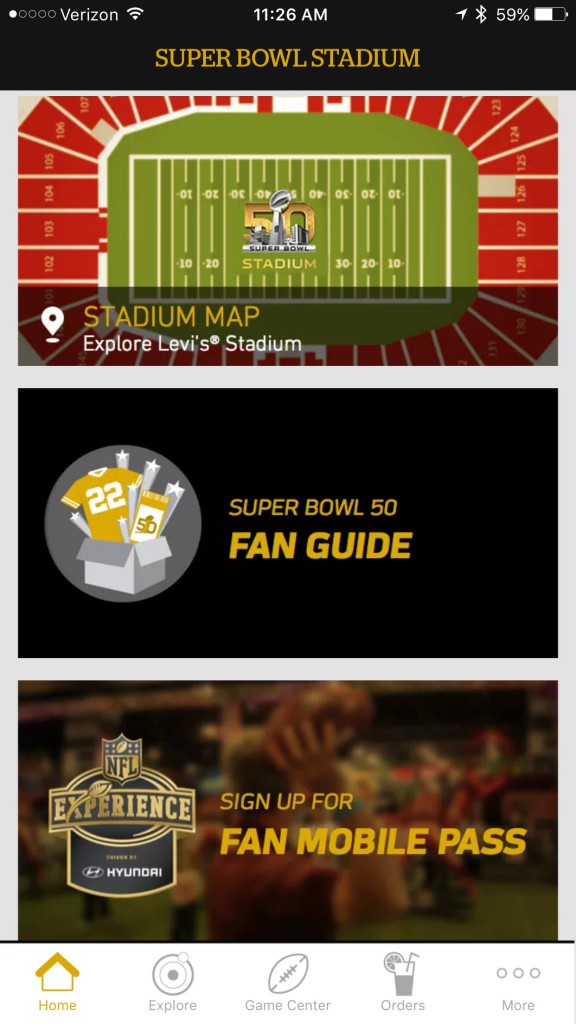 App users can even order food and have it delivered directly to their seat.

During the battle, fans can take a look at the one part of the experience they’re missing – the commercials. They can also take a look at instant replays from four different angles. Along with being able to view interactive stadium maps, you can even use the app to have food or game merchandise delivered directly to your seat.

In talking to Re/Code, NFL officials said the app is designed to keep fans entertained during the long commercial breaks:

“We’re still trying to entertain the fan during some of these commercial breaks,” said Jazz Singh, a product manager in charge of the NFL’s mobile properties. “We’re trying to fill in those gaps. For the large part, [the Super Bowl] is a social event, so you’re going to see people watching in the concourses and chatting, but there are those gaps that we want to fill in with both an entertaining and functional [app].”

The Super Bowl Stadium App is designed for the iPhone/iPod touch and can be downloaded now on the App Store for free. Actually getting into the game costs a lot more.

Super Bowl 50 kicks off at 6:30 p.m. EST this Sunday, Feb. 7 from the home of the San Francisco 49ers. It will air live on CBS. And check back later this week as we’ll roundup some of the best apps to use during the game.

For other app news today, see: Your kids are the stars in Chomp by Christoph Niemann, Endless running meets football and hockey in these new Blocky games, and Tired of tweeting on Twitter? Hop over and hoot on Hooti.

CBS plays nice with Apple TV and will stream Super Bowl 50
Nothing found :(
Try something else