Remember that game called Love You to Bits we told you about in December 2014? It was originally scheduled to be launched on iOS sometime in 2015, but it was nowhere to be found on the App Store even when the previous year came to a close.

Well, as it turned out, the game’s release was delayed for perfectly valid reasons. And it’s now set to be launched very soon.

How soon? A-couple-of-weeks soon. Love You to Bits is scheduled to come out on Thursday, Feb. 25, to be exact. (Interestingly, that’s just a few days after a certain romantic Hallmark holiday.)

The definite release date has just been announced by the game’s developers, Alike Studio and Pati.io.

The wait is over. The quest begins. Love You to Bits, out for iOS on February 25th. @AlikeStudio @patiGames #gamedev pic.twitter.com/6htu4PGckG

As shared by the developers through the infographic below, the release of Love You to Bits had to be delayed simply because Alike Studio and Pati.io wanted the game’s players to “have the best possible experience” and didn’t want to “release it thinking we could have done more.” Kudos to you, dedicated developers! 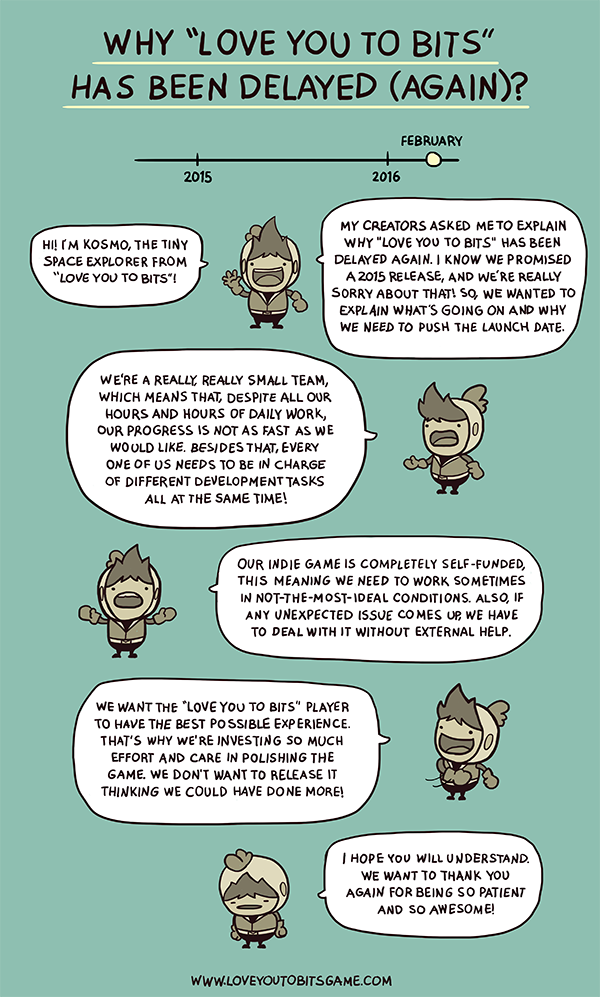 It’s worth noting that Alike Studio and Pati.io are made up of key members of the creative and programming team behind Tiny Thief, the acclaimed point-and-click puzzle adventure game published by Rovio Stars.

So it shouldn’t come as a surprise that Love You to Bits has a more than passing resemblance to Tiny Thief, at least in its puzzle mechanics and stylized graphics.

Touted as a science-fictional spiritual successor to Tiny Thief, Love You to Bits is a point-and-click puzzle adventure game that follows the admirable quest of a tiny human explorer whose robot girlfriend has been torn into bits, with the hero traveling through space and time in search of his one true love’s missing pieces. “All of them scattered around the universe: you’ll visit dozens of planets full of fantastic aliens, space-time puzzles and hidden objects to collect,” the game’s developers note.

Take a look at the trailer for Love You to Bits:

As big fans of Tiny Thief, we here at AppAdvice are looking forward to the long-awaited release of Love You to Bits. Stay tuned to AppAdvice for our full review of the game, which, as mentioned, comes out on Feb. 25.