You are using an outdated browser. Please upgrade your browser to improve your experience.
by AppAdvice Staff
May 27, 2021

Of all the different versions of Solitaire on offer, Freecell is the most tactically demanding. That also makes it the most satisfying.

FreeCell Challenge, from Darshan Somashekar and Neal Taparia, gives you nothing but the good stuff. It takes FreeCell, discards all of the other Solitaire variants, and presents it in the best possible light.

For the uninitiated, here’s how FreeCell works. All 52 cards are dealt at the outset, in eight random columns, and your goal is to tidy them up into four neat, sequential, suit-based piles.

To do this you first need to create sequential columns of red and white cards. The problem is, only eight cards are ever showing at once, meaning it’s unlikely that you’ll always have a valid move – e.g. a four of clubs to lay on a five of diamonds.

In the top corner are four cells, and you can use these to temporarily store cards, giving you somewhere to put them while you get at the cards underneath.

Here’s the rub. If you have to move, say, a run of three cards, two of them need to go via these cells. That means you can’t move them if three or all four of the cells are occupied. It’s a mean challenge.

FreeCell Challenge is from the studio behind Solitaired, a compendious collection of Solitaire games. Like Solitaired, its appeal extends beyond its slick, polished card-sorting action – it also boasts a range of different deck designs celebrating important figures and movements from throughout history.

There’s a deck made in collaboration with Encyclopedia Britannica featuring 52 leading suffragists, another one made with MIT’s Lemelson program featuring 52 great inventors, another featuring notable women from the world of computing, and many more.

Plus, there are some beautiful designs to enjoy, including the iconic Parrots and the classic Jones Playing Cards decks.

Not bad for a freebie. You can play FreeCell Challenge online right now, and on the Google Play Store – with an iOS version planned in the future. 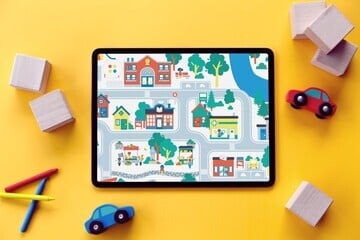 Pok Pok Playroom is a Digital Wonderland for Children