You are using an outdated browser. Please upgrade your browser to improve your experience.
by Christine Chan
August 18, 2016 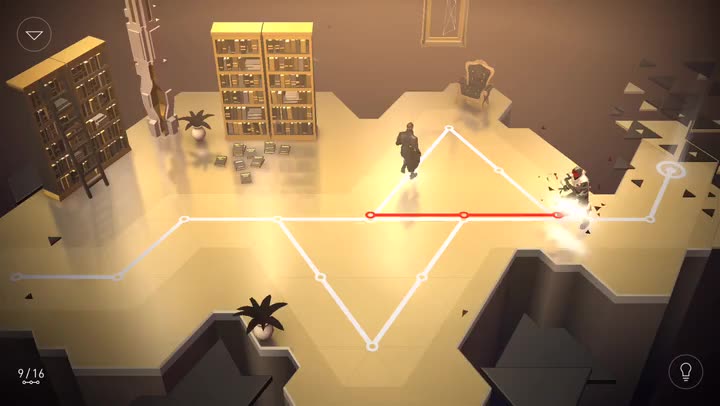 Deus Ex GO ($4.99) by SQUARE ENIX INC is the third installment of the GO series of games, which also includes Lara Croft GO and Hitman GO. For the uninitiated, the GO games take popular Square Enix franchises and distills them down into beautiful strategy puzzle games. Whether you’re a fan of the original game series titles or not, the GO games are definitely all worth checking out regardless.

Even though Deus Ex has been around since 2000, I never got into the games myself. In fact, I have a copy of Deus Ex: Human Revolution somewhere, but I just haven’t gotten to it yet because I have a large backlog of games and not enough time. Despite this, I know the gist of the Deus Ex games, since it combines stealth and role-playing elements with FPS action and features a lot of cyberpunk themes, hacking, and all that good stuff. I’ll get around to the real games one day, but since I loved the previous GO games (I didn’t play much Tomb Raider or even Hitman titles before), I had to get my hands on Deus Ex GO, especially after I had a demo of it at E3 this year. Now that it’s available on the App Store, I must say that it’s one of my favorite games so far this year. 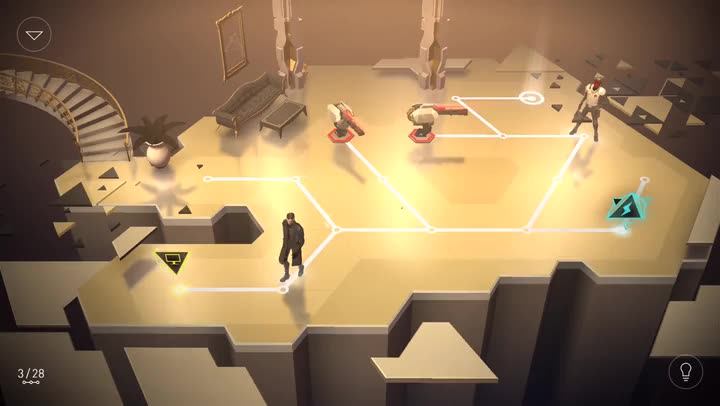 Visually, Deus Ex GO is gorgeous, as it is a stylized interpretation of the Deus Ex universe. If you’re a fan of the main games, then the world will be instantly familiar to you. Even if you’ve never played a Deus Ex game in your life, you’ll be in awe because of how good the game looks. Like the other two games, Deus Ex GO features 3-D graphics with an angled, top-down perspective so you can see all of the action that happens. The futuristic, dystopian environments are packed with fine details and textures, and the colors are bright and vivid with a subtle vignette effect going on around the edges of the screen.

Your character, Adam Jensen, will be sporting his signature black trench coat and sunglasses, while moving fluidly on each turn. His enemies, including guards, turrets, and more, have their own unique appearances, movements, and abilities that you have to watch out for. All animations in Deus Ex Go are smooth and flow seamlessly with no lag on my iPhone 6s Plus. There’s also an intricate plot to uncover as you go, which will be told through dialogue boxes that aren’t intrusive. The artwork for each character’s avatar in dialogue boxes is beautiful, as it’s done in 2-D but with a stylish low-poly look to it. The game’s atmospheric soundtrack immerses you in the Deus Ex world, and the sound effects are realistic.

Like the other GO games, Deus Ex GO is level-based, and players must go through each stage in chronological order to advance through the story, which involves a conspiracy behind a terrorist plot. The objective in each puzzle is to help Jensen get from the starting point to the portal at the end that takes you to the next area, but you can’t be detected by the enemies. There’s a line path on each level, and you move Jensen one space on each turn. If you’re detected by an enemy, they will activate their Titan Armor and come after you in a straight path, but only as you make your move. Turrets shoot you on sight, and later on there will be drones, walkers, and other crazy enemy types. Since everything is a puzzle and things happen on a turn-by-turn basis, it’s important to make note of where enemies are going and time your movements for the perfect opportunities to strike or escape using hacks and augmentations.

The controls in Deus Ex GO are simple, and you should know how it works if you played the other games. To make Jensen move, just tap on the point adjacent to where you are to have him walk over there. If enemy guards detect you, they will activate their Titan Armor and the path you’re on (in their line of sight) turns red. With the Titan Armor active, you can’t strike them, but if it is off, you can attack them from the sides or even behind to get rid of them. Other enemies like turrets can be disabled by sneaking up behind them, or you can even hack the computer systems (yellow icons) by tracing paths to have the turrets shoot down foes for you instead, or activate floor panels to get where you need to go. You can also get items like Invisibility, which you activate with taps to get by otherwise impossible spots, but don’t confuse invisibility with invincibility (this is an achievement). 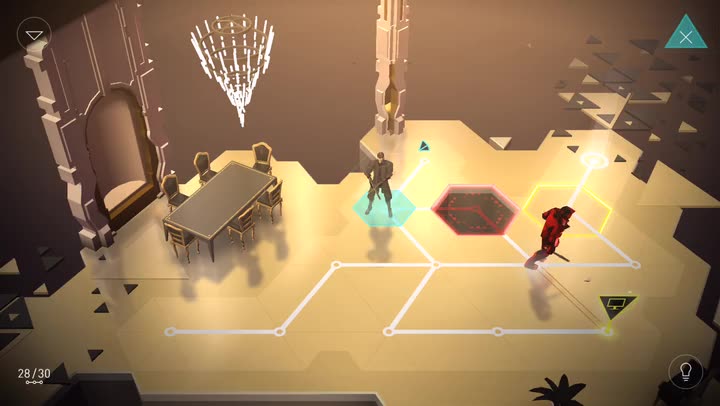 The amount of stealth gameplay combined with environment-manipulating puzzles mean a ton of challenging stages for players, which is a great thing. Deus Ex GO starts out pretty easy, but things get much more complex and elaborate as you have to use enemies to block other ones, take control of turrets, use invisibility to get by tricky spots, hack computers and change the flow of electricity so you can cross gaps in the floor, and much more. Fortunately, since there is no time limit or move restriction on the puzzles, you can take as long as you need to solve them, and if you fail, just try again — the game doesn’t penalize you.

In addition to the main story mode missions, the developers have a “Live Content” section, which includes new puzzle events every weekday, and you can play puzzles from previous days of the current week. However, these puzzles are incredibly complicated and hard to solve, and it is recommended to play through the Story mode first, though nothing stops you from taking them on.

I had been looking forward to Deus Ex GO for a long time, and needless to say, I’m not disappointed. The game has an exquisite and stylish aesthetic that represents the Deus Ex universe nicely, the ambient music is great to listen to, and the controls are simple enough for anyone. The puzzles themselves are hard and challenging, especially as you get further into the story, and having daily puzzles that aren’t part of the storyline adds to the replay value of the game. Like Lara Croft GO and Hitman GO, I’ll be keeping Deus Ex GO on my device for a long time to come.

I highly recommend checking out Deus Ex GO for yourself, whether you’re a fan of Deus Ex or not. It’s a fantastic puzzle game nonetheless, and one that you should not miss. Deus Ex GO is on the App Store as a universal download for your iPhone and iPad for just $4.99. There are in-app purchases for more hints if you are truly stuck (but trial-and-error goes a long way).