You are using an outdated browser. Please upgrade your browser to improve your experience.
by Christine Chan
February 19, 2016 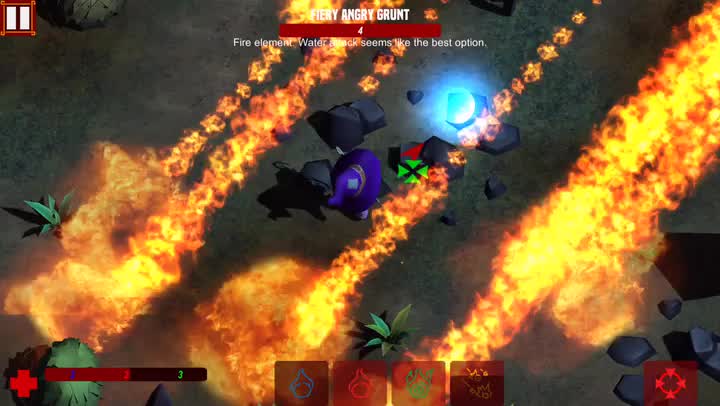 Fantasy Mage ($2.99) by Illogical is a combination of action role-playing and hack-n-slash games, creating a nice mix of action that most can enjoy.

When I was in high school, my love of fantasy and magic blossomed. Since we all know how stressful growing up and high school can be, I liked to escape into fantasy worlds for a break from reality. And even though high school is long gone for me, I still like to take a break every now and then to escape the stressful responsibilities I have in adulthood. That’s why video games are one of my favorite things — they’re great ways to pass the time, and I can just escape from reality. And while I love stimulating games most of the time, sometimes I just need something that allows me to mindlessly kill things without putting too much thought into it. Hack-n-slash games are perfect for the job, but as I love spell-casting, I thought Fantasy Mage would be right up my alley. 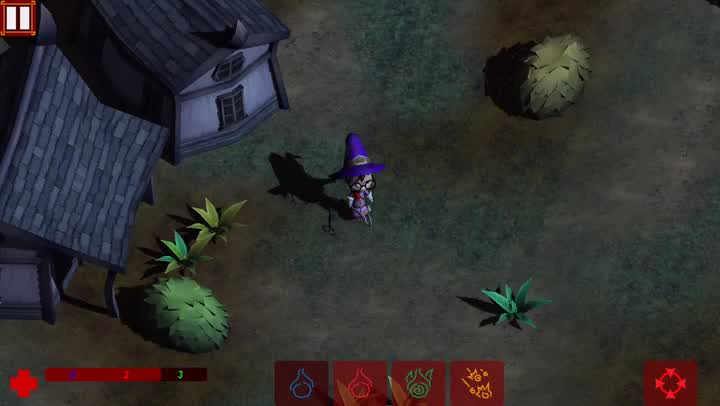 The graphics in Fantasy Mage are pretty sharp, and just about what I would expect from a mobile game. It is rendered in 3-D with an angled, top-down perspective, so you can see enough of the battlefield with a single glance as you move around. It’s not the most detailed game I’ve played, but it is sufficient enough for most. The colors run a bit darker than I’d like, but that’s because of the shadows that cover the village. I mean, what do you expect from villages that seem abandoned due to the plague of skeletons that have taken over? Still, for whatever vegetation life remains in the villages, the greens look nice and lush. Buildings, though, kind of blend into the darkness. Animations are fairly smooth and fluid in the game, and the ambient soundtrack is rather upbeat and soothing during the game menu, but a bit more techno-ish during gameplay. It’s a weird mix, but it doesn’t detract from the actual game itself, which is good.

Fantasy Mage is a level-based game, where players must progress through the story stage-by-stage. While there is a pretty basic story going on in Fantasy Mage, the game will give you a short text brief before you begin a level, explaining the current situation to you. However, for the most part, there is not much variation between how each stage looks — you have a barren village that has been deserted by the people who lived there, though it still has a nice bit of bright and vivid vegetation still intact. While the layout may vary, it’s largely the same thing on each stage, so there is a bit of repetitiveness going on here. The objective is simple, but doesn’t add much variation either: just clear out all of the skeletons on the stage, and then it’s complete. Again, I found it to be a bit repetitive.

Fortunately, the game does have some variety in terms of the combat itself. Since you’re a mage, you specialize in elemental spells. Unfortunately, the enemies also have their own specialized element when they attack, whether it be mêlée or ranged, so you have to take their element into consideration when making your own move. The game’s “auto-target” button in the bottom right corner will pinpoint the nearest enemy to you and point out their element, giving you time to plan out your counter attack. The cycle of elements is pretty simple and straightforward: water is strong against fire, fire is great against earth, and earth is good against water. It’s like an elemental version of rock-paper-scissors, and once you get the basics, combat becomes easier.

While the controls in Fantasy Mage are easy to understand, I think there could have been some better optimization, because it did felt cumbersome at times. To move, you just tap where you want your mage to move to, or keep your finger on the screen to move continuously. When you see an enemy or are engaged in combat, just tap on the foe to begin attacking with your spells. Your equipped spells show up at the bottom of the screen, and you can tap on the one you want to use at the moment — switching on the fly is just a tap away. The auto-target button locks on to the closest enemy and you’ll begin to attack once you’re in range. 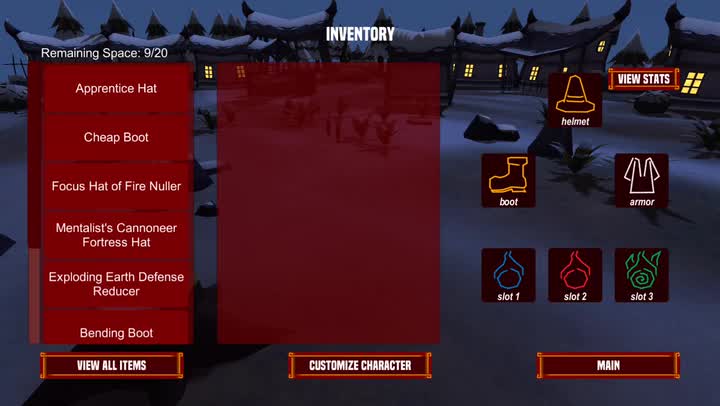 Though the controls are pretty simple to pick up, I found that it gets annoying at times. I would have preferred a virtual joystick of some kind to move around, as the current control method means my fingers are always on the screen, making it hard to see what’s around my character, and sometimes it’s like I’m stuck. I’d also like to have a button to start attacking, rather than tap on the foe, because again, my finger just gets in the way. All-in-all, I just want to see some better optimizations for the controls so that they don’t feel as clumsy.

Since the objective of each stage is to clear out the skeletons, once they’re all accounted for, the stage ends and you will earn experience points and loot for your troubles. As you level up, your character will earn skill points that can be distributed into four areas: Rage, Focus, Stamina, and Constitution. Rage deals with water defense and attack speed, Focus is for fire defense and reload speed, Stamina affects earth defense and move speed, and Constitution has to do with your character’s health, which is indicated at the bottom left corner.

The loot will always be randomized, and will be a mix of equipment (helmet, boot, and armor) and even different spells. To equip your mage, just go to the Inventory screen from the main title, and you can tap on the slot you want to change gear for. However, be careful, since you have limited inventory space — if there is something you don’t need, you can just destroy it to free up space. There is also an option to compare an item or spell with something else, in case you are wondering which one would be better. But don’t get your hopes up on changing your mage’s appearance — her look remains static throughout the entire game, no matter what you’re using.

I was excited for Fantasy Mage when I first heard about it a few weeks ago, but I’m going to admit I’m a bit let down by the game overall. While it looks nice during the actual game, I found the menus and such to be a bit barebones, and the music, levels, and missions are repetitive and get stale after a while. I’m also sad that the appearance of my mage never changes, which is one of the biggest reasons I like to play these kind of RPG games. It also doesn’t help that there is not even a way to tell which items in your inventory are new, because they’re all just kind of there, all bundled up, though you can separate by category.

Fantasy Mage is not a terrible game, but it certainly did not live up to my expectations. However, it’s a decent time-waster and a lighthearted game that could be good for casual players.

If you are still interested in checking out Fantasy Mage, you can find it on the App Store as a universal download for $2.99. 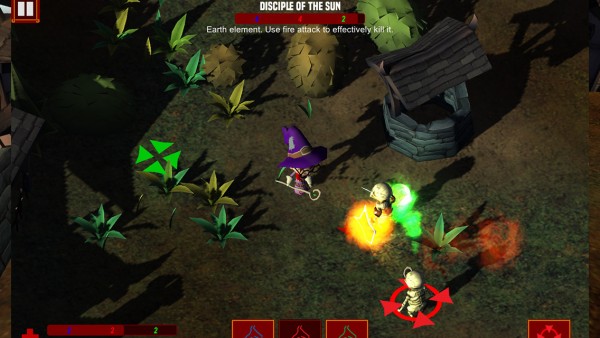 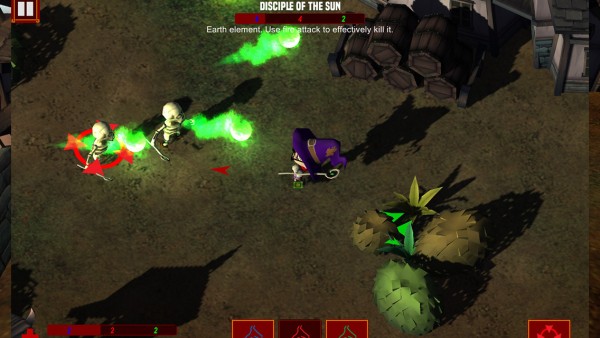 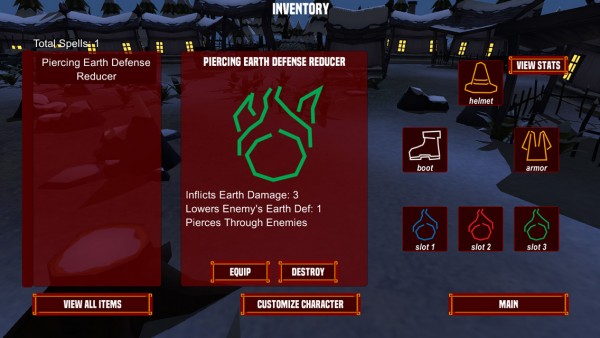 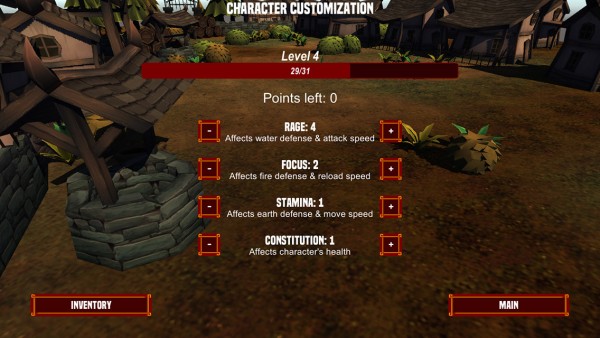 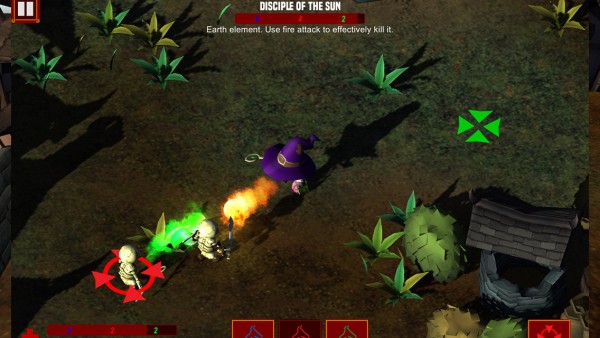