You are using an outdated browser. Please upgrade your browser to improve your experience.
by Christine Chan
July 9, 2015 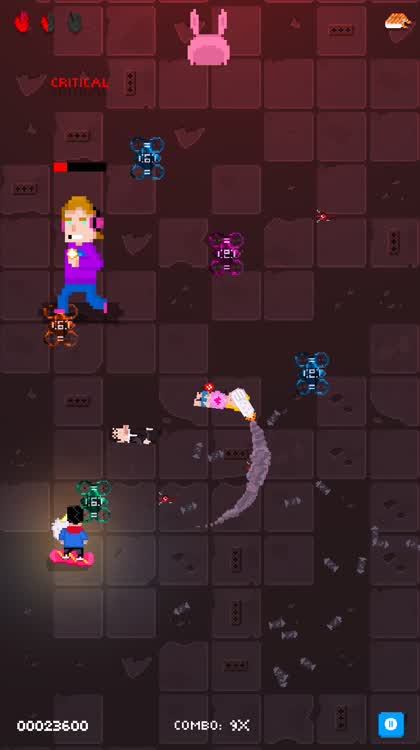 Shooting Stars! ($2.99) by Noodlecake Studios Inc and Bloodirony Games is a wickedly fun bullet hell shoot’em up (shmup) roguelike game. Have you ever asked yourself, “I can haz lazer kitty?” In this game, you most certainly can, and it’s awesome.

I’ve been a big fan of Noodlecake Studios ever since they came out with great games like the Super Stickman Golf franchise, but lately they have gone the publishing route instead, which is still delightful. We’ve gotten some gems like Joinz and Brickies, and I’ve been eager to get my hands on Shooting Stars ever since I saw the trailer for it. Now that it’s here, it’s well worth checking out. 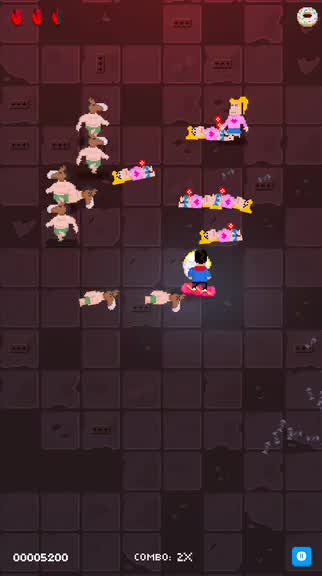 Imagine a world where evil aliens have taken over the planet, but disguised as superstars. You know, those celebrities that it seems everyone is so in love with and admire all the time. It’s a pretty genius plan, after all — aliens disguised as stars, controlling humans. Fortunately, there’s one guy (Tscherno) who isn’t falling for it and, with the help of the sacred rainbow unicorn, equips himself with a hover board and a cat that shoots lasers. Let’s admit it, these are the best kinds of weapons against invading aliens. Your goal is to fight back, free the imprisoned stars, and restore balance to Earth.

The graphics in Shooting Stars are gorgeous, going with the retro 16-bit look and feel to it that classic gamers love. The game’s filled with bright colors, lights, lasers, and explosions, so it is a visual treat on your screen. The characters also look great, especially the iconic celebrities that you’ll encounter, which include Justin Belieber, PewDerPie, Kanye East, Brillex, and many more familiar faces. Animations are smooth and fluid on my iPhone 6, and the soundtrack is upbeat and quirky with fun sound effects. Bloodirony Games put together a splendid package when it comes to the visuals and audio here.

There are two game modes in Shooting Stars at the moment: Card Hunt and Daily Run. Card Hunt has players helping Tscherno find hidden collectible cards by defeating celebrity bosses after going through multiple waves of enemies. The longer you last, the harder things get. The Daily Run consists of a daily generated level that players fight their way through and compete with others for the best score. Since Shooting Stars is a roguelike game, each run in Card Hunt is procedurally generated, so no run is ever the same.

Controls in Shooting Stars is simple and intuitive. To move Tscherno freely around the stage, just move your finger around the screen — he will follow. As he moves, his cat shoots lasers, so you don’t have to worry about another button for attacking. Super attacks can be activated by double-tapping on the screen. The controls work well, though I did notice that sometimes my finger would be directly above Tscherno, so it would be hard to see if I can avoid an incoming bullet. I would recommend giving some thought as to where you initially place your thumb, because that has a big impact on visibility. 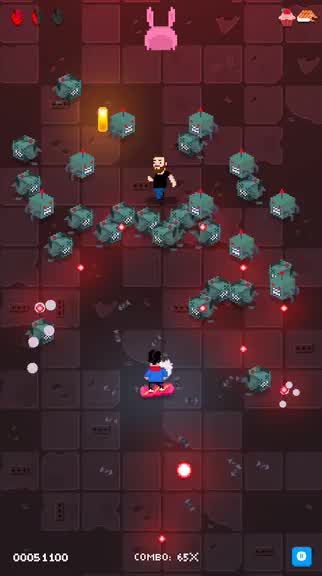 As you defeat hordes of enemies, they may drop power-up items and superfoods. Collect these and Tscherno gets an improved ability, like increased critical hit chance, or better attacks. These can also be stacked, so Tscherno becomes the ultimate weapon of mass destruction against the celebrity imposters. But be careful about getting hit with an enemy bullet — you only have so much health (shown in top left), and once all of that is gone, the run ends and you’ll have to try again.

As I mentioned, since Shooting Stars has a mode where it involves competing with others for the daily top score, it’s a game with high replay value, and that is only made better with Game Center integration for leaderboards and achievements.

However, there is one problem with this that I encountered, and it’s that the game will constantly crash on launch if you have “too many” Game Center friends. The developers are aware of the issue though, and are working on a fix. For now, if you have a crashing issue after the Game Center banner shows up, you have to log out of Game Center to play until this gets fixed. Fortunately, non-Game Center users are still ranked.

I’ve been playing Shooting Stars since the beta, and this is one of the most enjoyable games I’ve played so far this year. The visuals are stunning, the music is quirky, the controls are simple, and the roguelike shmup gameplay means a fresh new experience each time you play. All of the zany pop culture references and satire will get laughs out of you too. Shooting Stars is definitely one of my favorite games so far this year.

I highly recommend checking out Shooting Stars if you are looking for a downright insane game, or just love roguelikes and bullet hell arcade games. Shooting Stars is on the App Store as a universal download for $2.99. 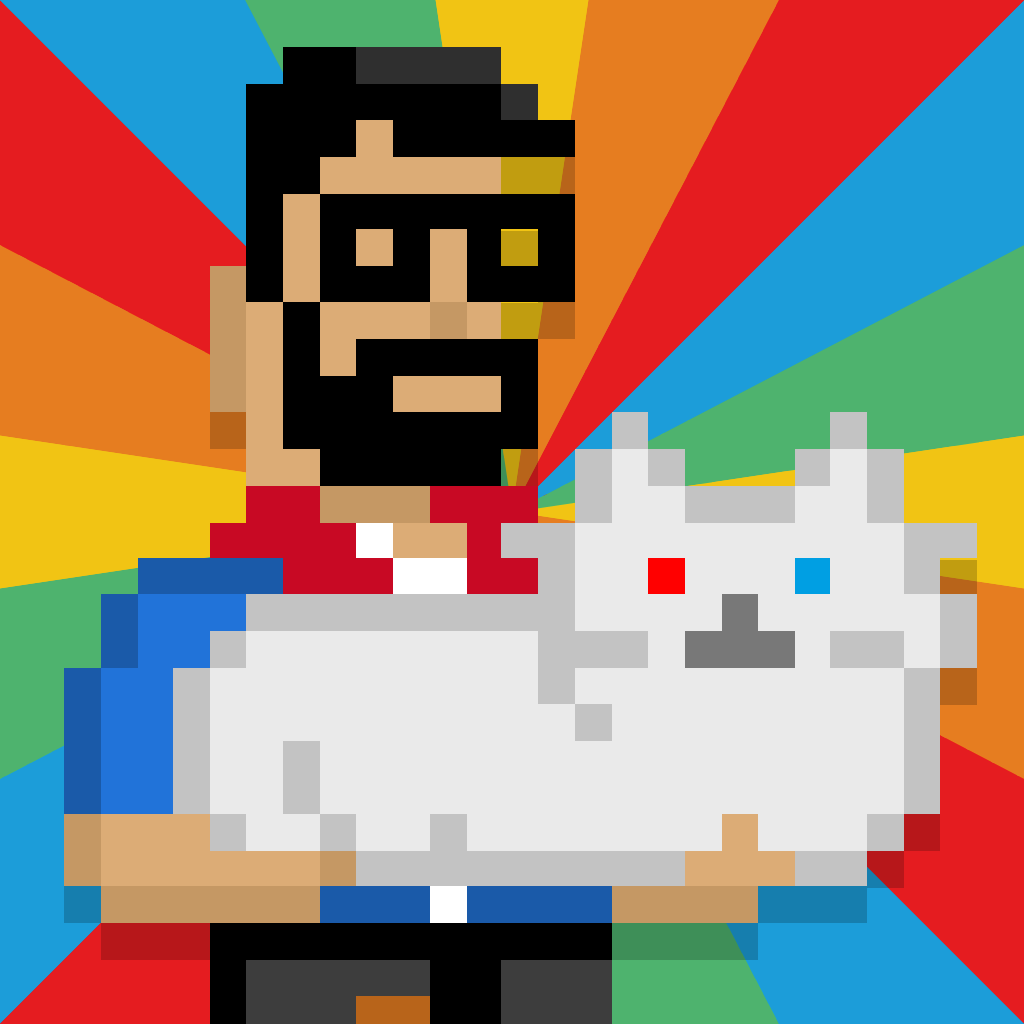 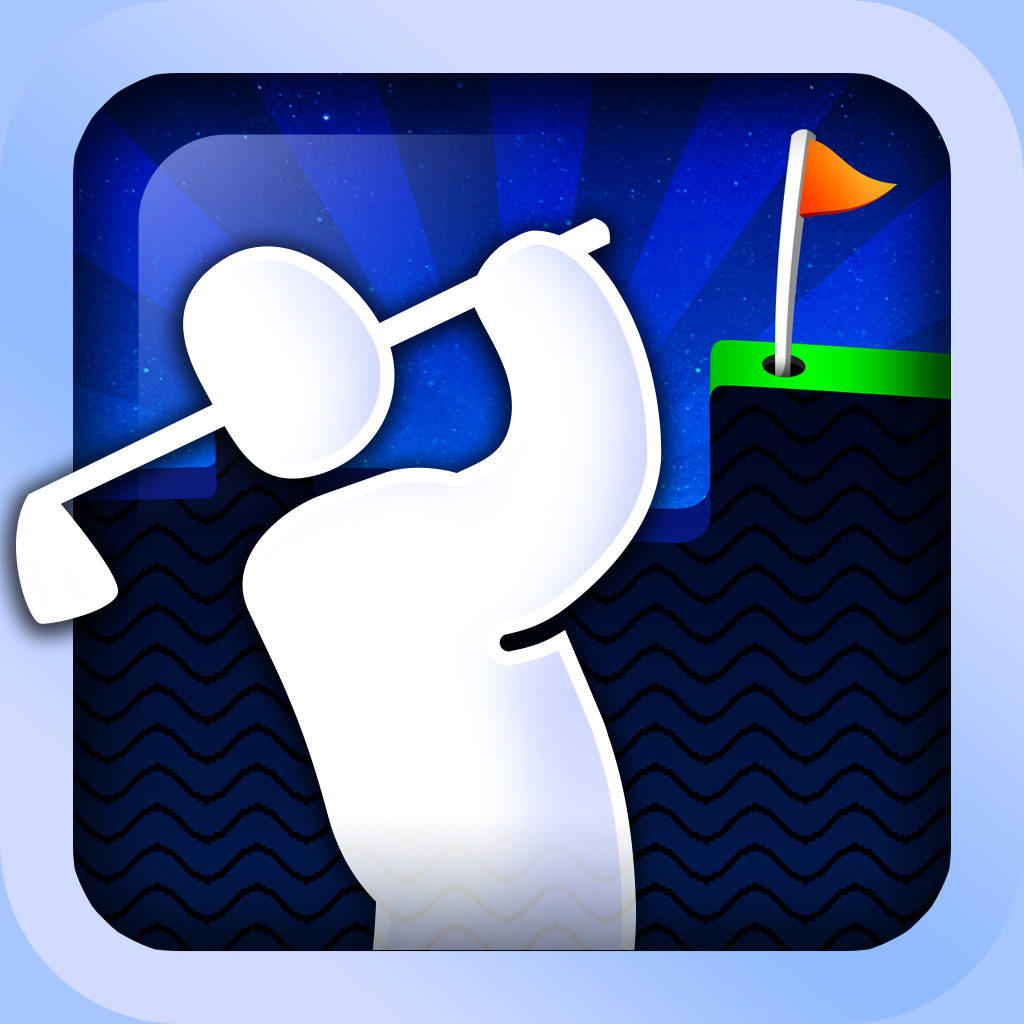 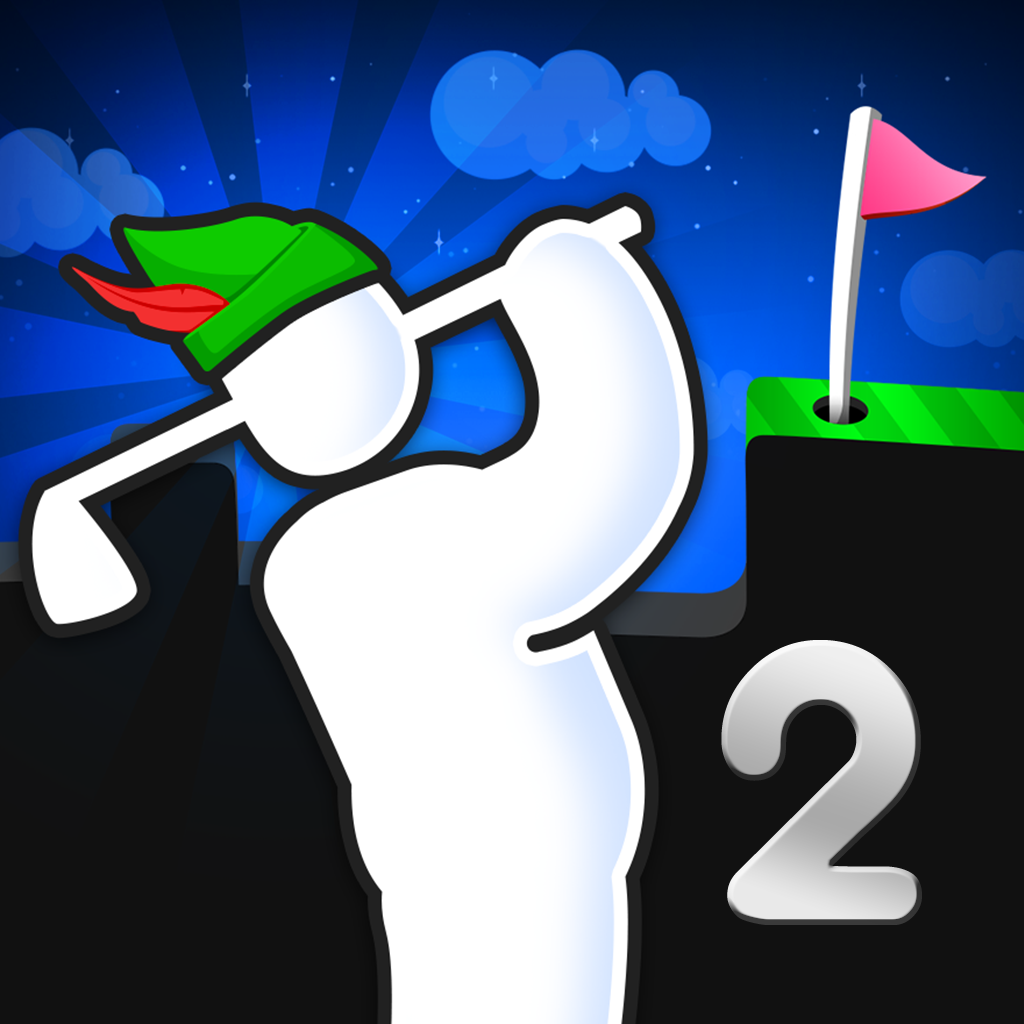 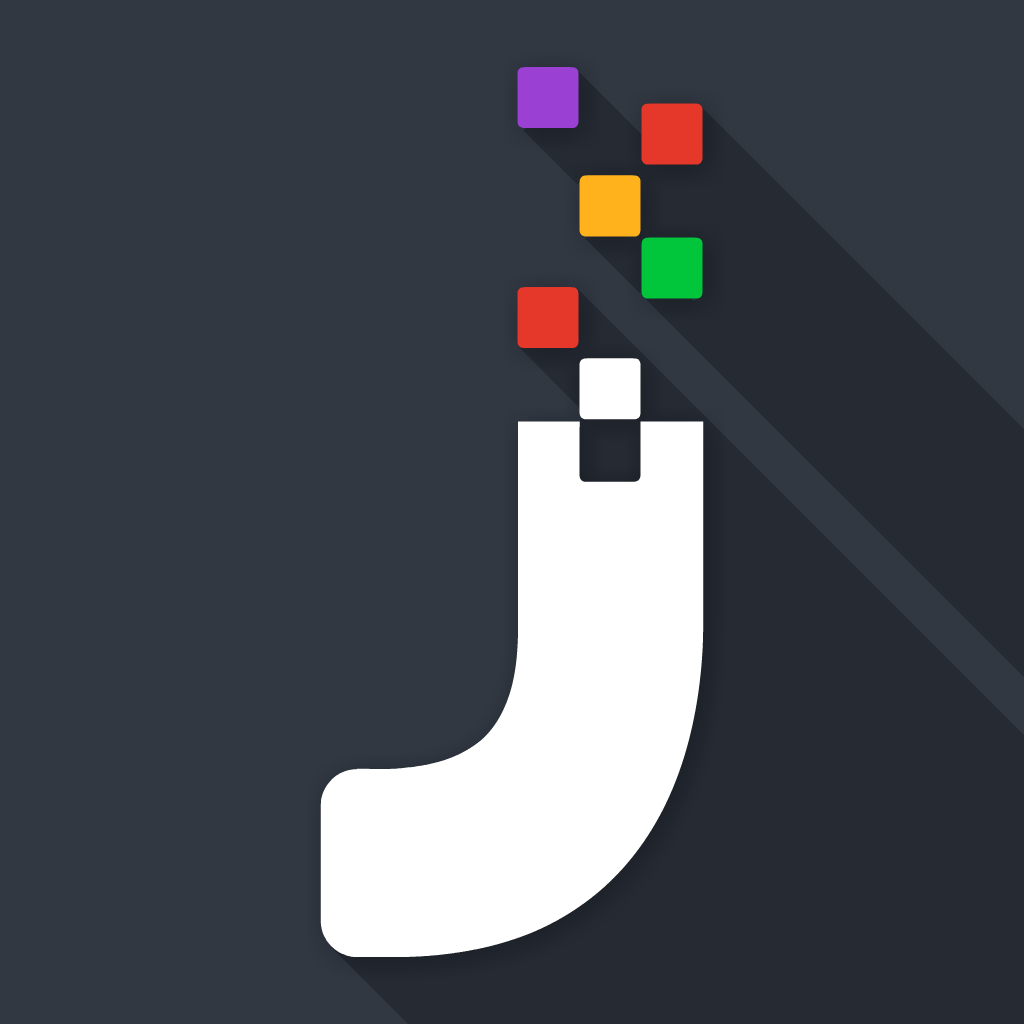 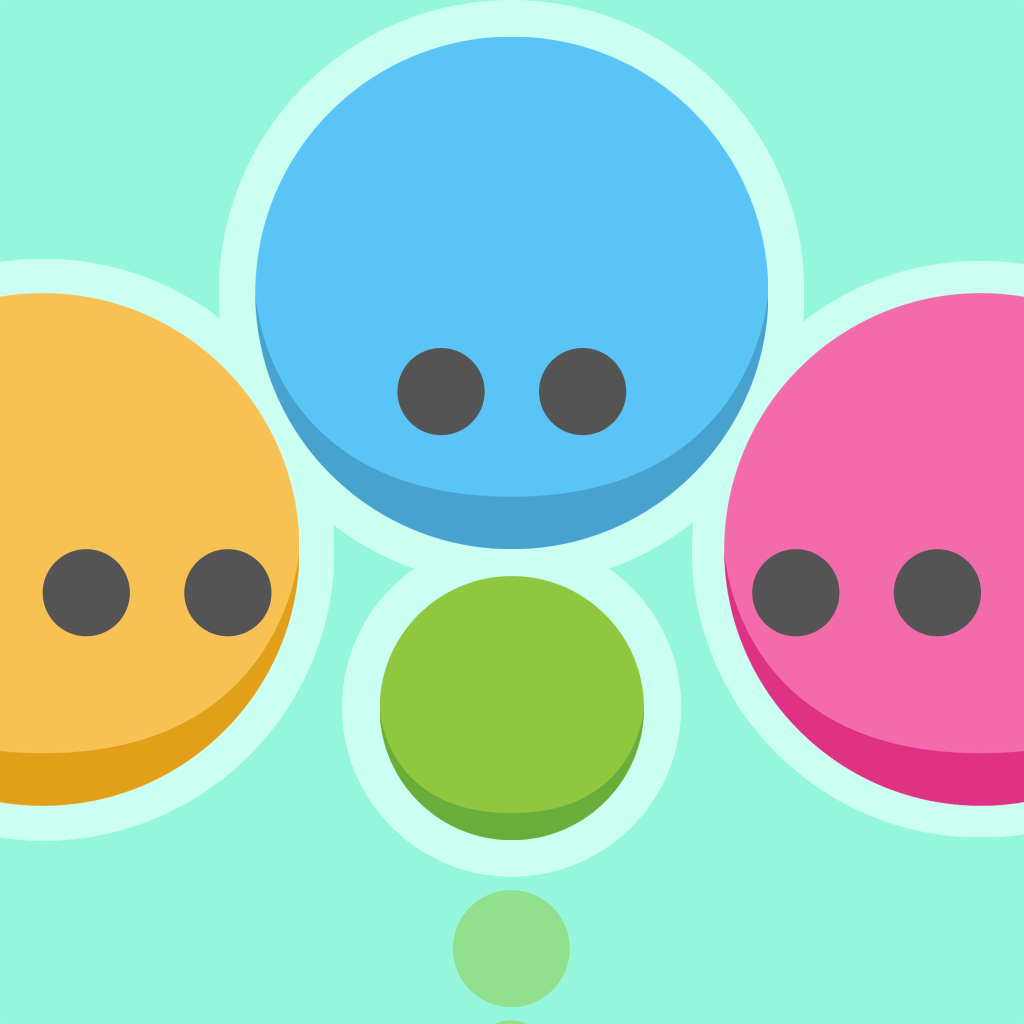 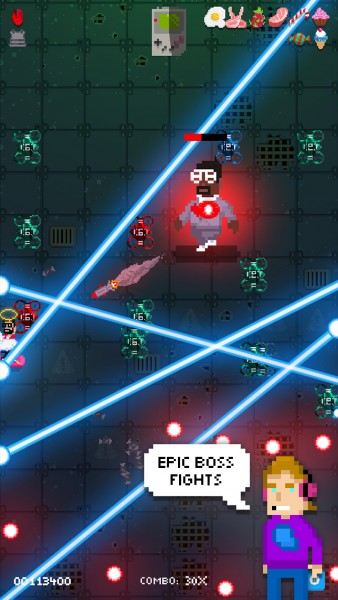 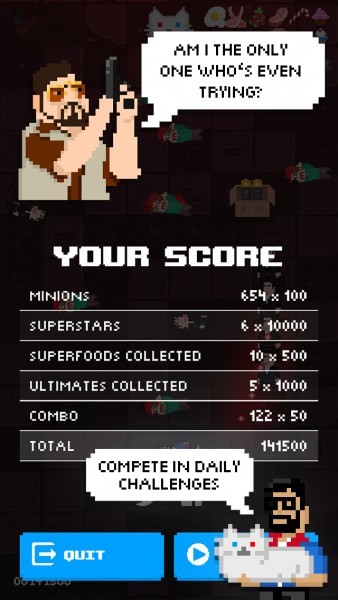 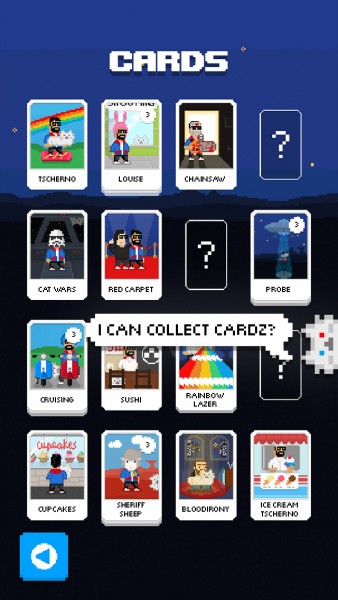 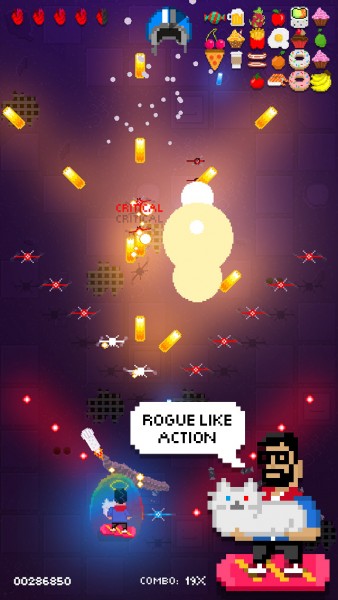 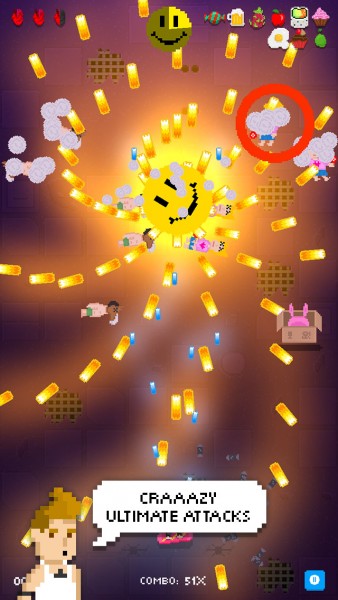 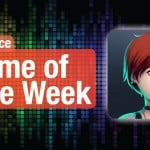