You are using an outdated browser. Please upgrade your browser to improve your experience.
by Christine Chan
December 9, 2016 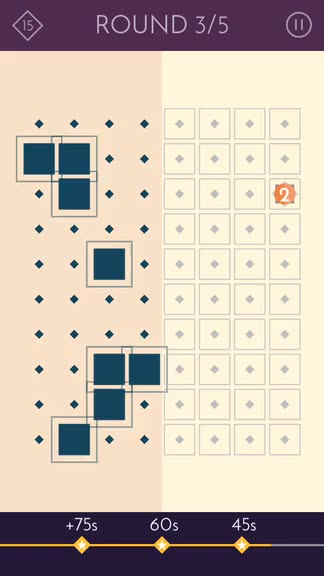 Symmetria: Path to Perfection (Free) by Platonic Games is a fast-paced puzzle game that is all about symmetry. If you’re the type of person who gets a bit OCD over things being perfectly symmetrical with one another, then this is the perfect game for you. It joins other symmetry games on the App Store, such as Asymmetric.

With a lot going on in my personal life at the moment, sometimes I just need to sit back and relax with a game on my phone, and for these moments, I always go for a puzzle game. I’ve enjoyed puzzles since I was a little kid, and it’s probably the fact that I love a challenge and like to keep my brain in tip-top shape, even in my downtime. Plus, I find puzzles to just be relaxing, even if there’s time limits on them. And while I am not formally diagnosed with OCD, I tend to get a bit obsessed with perfection at times, such as always having clean hands or making sure that everything is perfectly in their place. With the latter, this includes symmetry, and it bothers me when something is just slightly “off,” if you know what I mean. That’s why when I first heard of Symmetria, I knew that it was a game for me because I can be a perfectionist at times. I’ve played the game during the beta testing phase as well, and now that is finally available, it’s definitely a must have for any puzzle game fan that also has a mild case of OCD about symmetry. 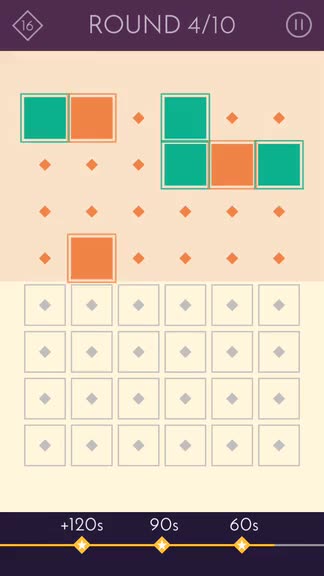 In terms of the game visuals, Symmetria feature a simple and clean design that will appeal to any fans of minimalism. The game uses the stars and constellations as a constant theme, so you are greeted with a dark background that is twinkling with lively stars. Sharp buttons fill the game and the sans serif typeface is just gorgeous to look at. The stages consist of a light colored background on the board itself, and then various colored squares will occupy half of the grid, whether it’s vertical or horizontal. I’m in love with the colors that the game uses, because the squares are nice soft colors with a bit of oomph to them so that they really pop against the creamy beige background. And while the squares start off just being solid colors in the beginning, obstacles get introduced after the first chapter in the campaign, and they’re labeled with minimalistic icons that give you a clear idea of what they do, so there’s not much guesswork involved. Animations are fairly smooth and fluid with no lag on my iPhone 7, and the tranquil and soothing atmospheric soundtrack fully immerses you into the game. The only problem I have is the fact that the game, like several others lately, will halve your background audio, so hopefully that gets fixed in a future update. Still, for the two-man team behind Platonic Games, they’ve done an excellent job with how Symmetria looks, feels, and sounds.

If you are wanting a variety of different modes for your puzzle game, then Symmetria comes packed and ready-to-go. The game contains three modes that are available from the get-go: Campaign, Endless, and Battle. Campaign is the basic single-player mode, where you will solve puzzles one-by-one in chronological order and go through five chapters, represented by constellations, that have a good handful of stages each. Plus, each level is consists of several different parts, so you’ll have to solve a few before it’s considered “complete.” The objective for these stages is to match the pattern on one half of the board to the other, and while it seems easy at first, the levels get larger and more intricate with new obstacles being introduced at each chapter. Fortunately the game gives you a brief prelude on what each new element does, so it’s a gradual increase in difficulty. In Endless, it’s more of Survival as you’ll solve as many boards as you can before the time runs out, so it’s a frantic high score chaser and definitely not as easy at seems. Battle lets you play against someone else locally on one device, completing rounds to earn more points than the other. While most of your time will probably be spent in the Campaign, it’s nice to see that Symmetria includes a ton of variety in the initial free download. 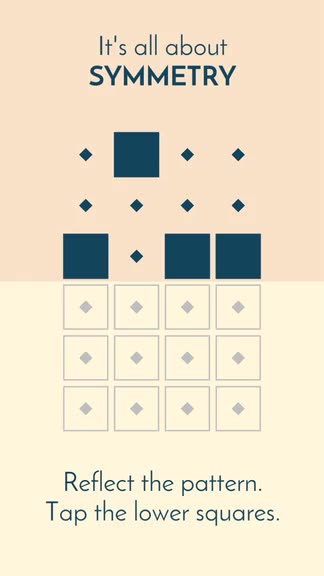 While you get access to the first two constellations in the initial download, the other three are locked behind the premium in-app purchase of $2.99. This premium upgrade also gets rid of all ads, and you’ll have another 45 levels of symmetrical goodness, which I think is worth the price, considering how challenging and satisfying the game can be.

The controls in Symmetria are simple — to activate a square, just tap on it. Since the goal is to match the pattern on the other half, you’ll want to tap the proper squares that will make everything symmetrical. As more colors are introduced, you’ll have to tap squares multiple times in order to match the colors as well, and when obstacles come into the picture, you’ll have to tap on them to get rid of them. If you make a mistake, just tap a square until it defaults back to being empty. Once the patterns are symmetrical with each other, you’ll see visual feedback on the screen before moving on to the next section. The game also defaults to show you hints, which are subtle outline flashes of the correct squares that you need, but these can be turned off if you prefer not having them.

I’ve been playing Symmetria back when it was still being called “Cartesian” in the beta, and I’ve loved it. The game looks fantastic with the sharp and crisp minimalistic graphics, the music is relaxing, and the gameplay itself is deceptively simple but gets a nice and gradual uptick in difficulty as you get further along in the constellations. If you even have a little bit of OCD in you, then this is truly a game that you must check out. The only improvement I would like to see is not halving background audio, so hopefully that’s fixed soon.

I highly recommend checking out Symmetria if you are a fan of puzzle games and consider yourself a perfectionist with a dash of OCD about symmetry. You can find Symmetria on the App Store as a universal download on the iPhone and iPad for free. There is a $2.99 in-app purchase for more levels and removal of ads. 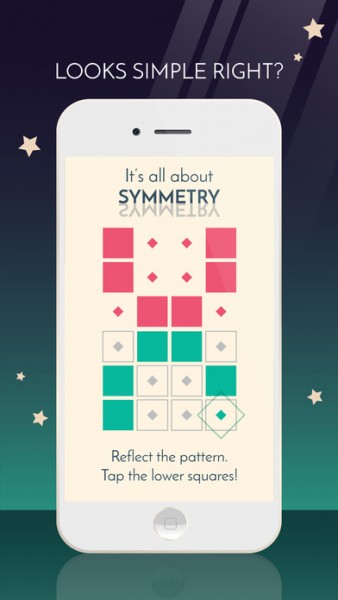 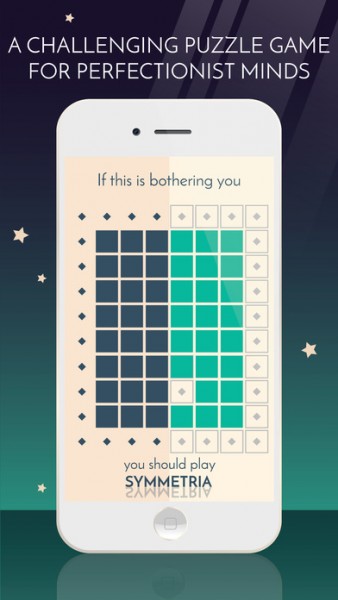 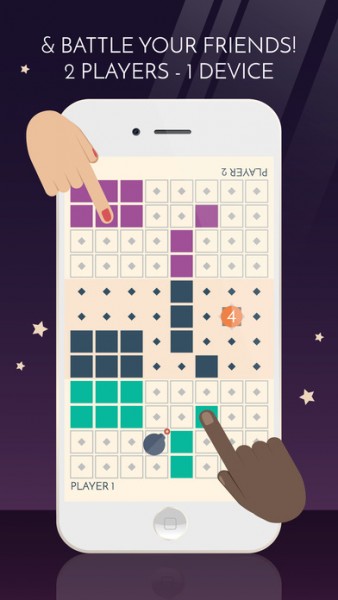 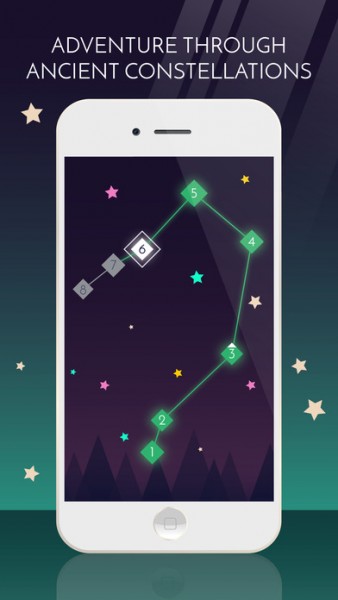 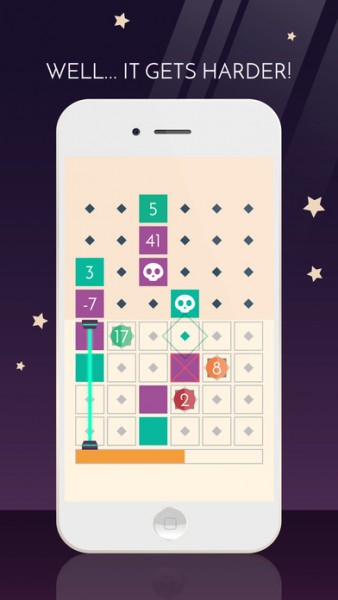