You are using an outdated browser. Please upgrade your browser to improve your experience.
by Christine Chan
October 24, 2016 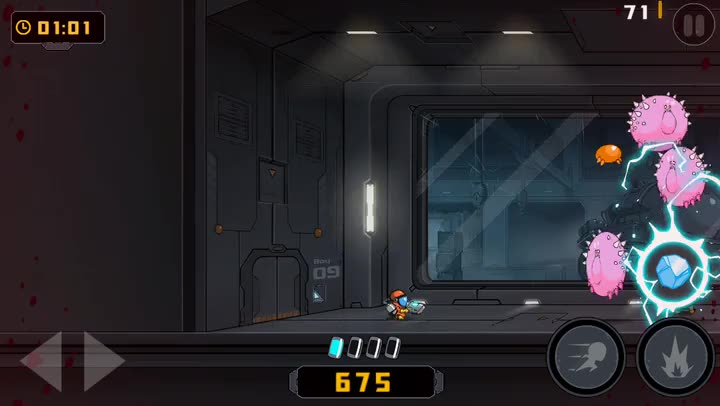 The Bug Butcher ($3.99) by Noodlecake Studios Inc and Awfully Nice Studios is an action-packed arcade shooter that will keep you on your toes with all of the intensity of fighting off nasty space bugs. This is the mobile port of the original game that launched on Steam earlier this year. If you enjoyed games like Glorkian Warrior and Galaga, then chances are high that you’ll like what The Bug Butcher brings to the table.

When I’ve had a long, stressful day, I like to relieve my stress by playing video games. Preferably ones that involve outrageous weaponry so I can unleash my fury on unsuspecting critters that need to be exterminated anyway. Arcade shooter games are perfect for the job, because they’re always intense, full of action, and involve high score chasing with each round. I had not heard of The Bug Butcher until last week, to be honest, but I noticed that it looked like something that would be right up my alley when I needed to rage out on. So naturally, I had to check it out for myself. 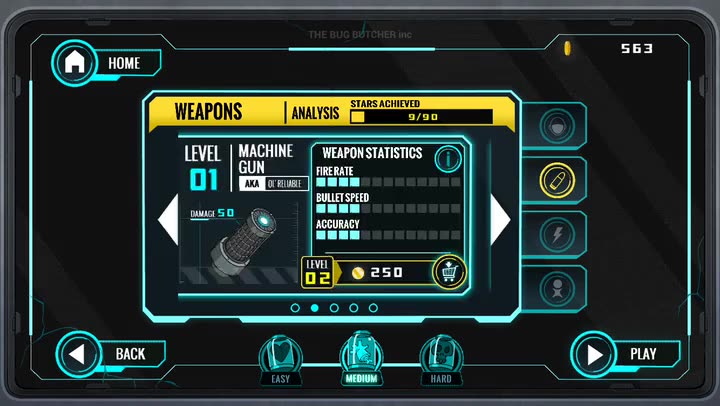 Visually, The Bug Butcher is gorgeous, even though the alien bug creatures you’re fighting are kind of disgusting. The game features a fantastic cartoon art style that is sure to appeal to anyone who likes quirky graphics, and the 2-D is rendered well with the incredible backdrops of the rooms that you’re in. The colors in The Bug Butcher range from bright and vibrant hues to darker, more gloomy tones, and everything contrasts nicely with each other so it all stands out on your Retina screen. I found the animations to be smooth and fluid, and the techno dance music and sound effects are a fun, eccentric touch.

In The Bug Butcher, players take on the role of Harry, a bug exterminator in space. You get a new assignment that takes you to the planet of Zoit, where you find out about a futuristic research facility run by a dwindling number of surviving scientists, and the facility is infested with dangerous space bugs. Your goal is to survive the decontamination procedure initiated by the scientists by getting rid of all of the bugs that are brought in during the process. While it may sound easy, it truly gets difficult once things get insane and hectic in the room.

The Bug Butcher features two game modes: Arcade and Panic, and three difficulty levels (Easy, Medium, and Hard). You start with Arcade mode and go through the campaign one level at a time. As you make progress in the Arcade mode, you’ll unlock maps for Panic mode, which is essentially an endless mode. Each stage in Arcade mode features several waves of enemy bugs coming in, and you must exterminate them all within the allotted time limit. Your score depends on racking up successful combos (kill enemies quickly without getting hit yourself), collecting coins, and completing it within the time frame (the faster, the better). The same objective is also for Panic mode, but it’s also a test to see how far you can get before you lose.

Controls in The Bug Butcher are simple enough to understand, though I think they’re far from perfect. The two directional arrow buttons in the bottom left let you move Harry left and right. On the right hand side, you have a button that allows you to perform a dash, and another button to shoot upwards (hold down for continuous fire) with your exterminator guns. When you get enough kills, you fill up your power-up gauge that sits above the attack button, and you can activate your power-up mode with a tap. The boost only lasts for a short amount of time, though, so you have to make sure to use it wisely, otherwise it may be a while before you can use it again. 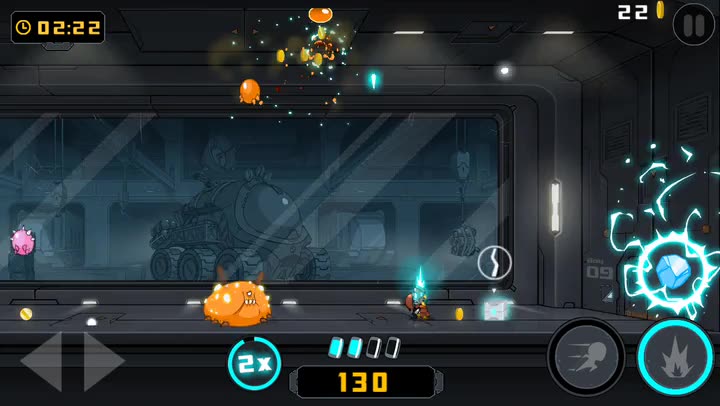 My biggest concern with the controls is the fact that it seemed like the directional buttons got stuck often, because I found myself in one spot even though my thumb was on the button for the direction I wanted to move in. I wish that there was some customization for the controls, as I would like to change the spacing between the left and right buttons, because they seem too close together for me in the default setting. Hopefully the developers can consider letting players fine-tune the control positioning to better suit our individual needs.

As you shoot down nasty space bugs, they’ll drop gold coins that you can collect — the more coins you have by the end of the round, the more points you get. But you’ll have to be fast at collecting them since they will disappear after a few secodns. Plus, the coins can be spent on various upgrades for Harry, such as shields, guns, speed boosts, and more that can be unlocked as you play.

I only started The Bug Butcher this morning, but I’m loving the game so far. It’s the perfect little game for just unleashing my wrath on space bugs when I need to release some stress, and the graphics are stunning and the music is top-notch. The different game modes and difficulty levels provide players with plenty of replay value, especially since the levels get harder at a gradual pace, and all of the unlockables will keep you coming back for more. I just hope that the controls get better optimized in terms of responsiveness in the future, and allow us to tweak the positioning and spacing between buttons.

I highly recommend checking out The Bug Butcher if you’re into frantic arcade shooters and want a great stress reliever. The Bug Butcher is available on the App Store as a universal download for your iPhone and iPad for $3.99. There are no in-app purchases. 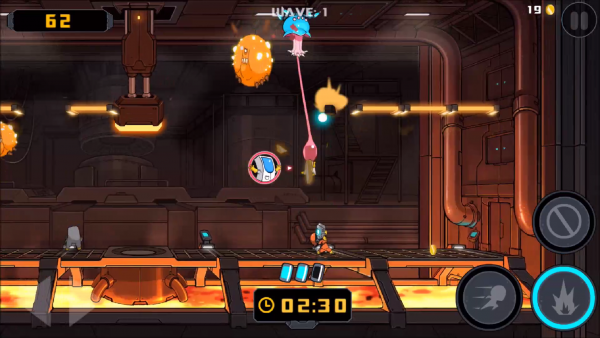 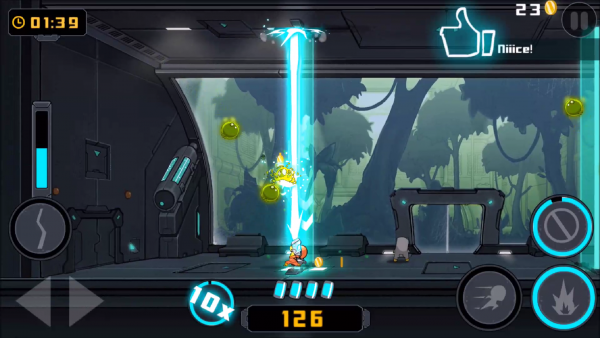 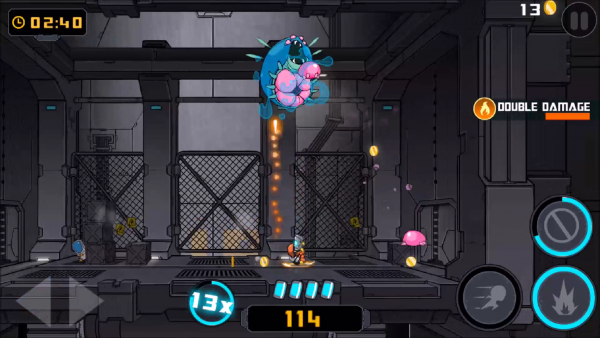 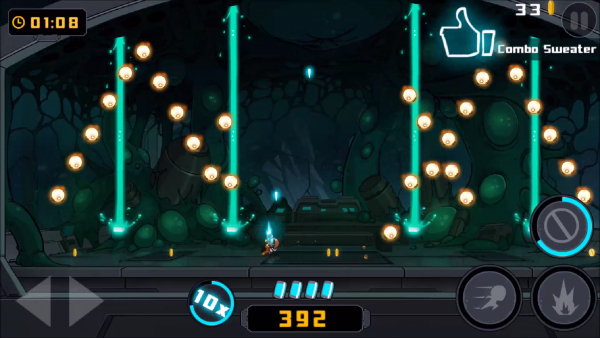 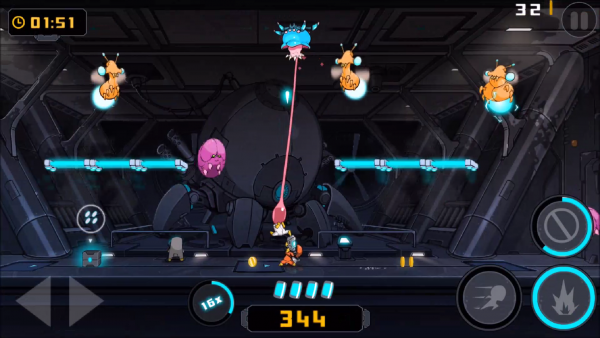