You are using an outdated browser. Please upgrade your browser to improve your experience.
by Joe White
May 29, 2011
According to someone "in the know," Apple's second generation iPad should be jailbroken by @p0sixninja in "about three weeks." The news comes from @veeence, the guy who successfully predicted the release of an untethered jailbreak solution for iOS 4.3.1. According to a Twitter update posted by @veeence yesterday, we should expect support for the iPad 2 to be added in around three weeks:

It'll likely work on the iPad 2G as well, as soon as it gets jailbroken. Rough ETA is about 3 weeks, according to @p0sixninja.

As noted by a variety of different reports, @p0sixninja has been hard at work on developing a jailbreak solution for the iPad 2. Because of the device's Apple A5 dual-core processor, this has been difficult to achieve. More recently, the Chronic Dev Team admitted that it had uncovered "one of the missing puzzle pieces" regarding an iPad 2 jailbreak, suggesting that a solution is definitely nearing completion. We'll keep you posted. In the meantime, let us know if you're excited for the iPad 2 jailbreak in the comments! [via iJailbreak, and thanks to Dusty!] 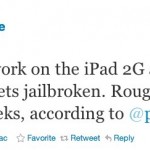 The iPad 2 Should Be Jailbroken In Three Weeks

The iPad 2 Should Be Jailbroken In Three Weeks
Nothing found :(
Try something else