You are using an outdated browser. Please upgrade your browser to improve your experience.
by Joe White
July 2, 2011
Here's an impressive piece of information for you: Apple's "magical and revolutionary" iPad, which originally hit Apple Stores back in March, last year, now accounts for over one percent of worldwide Web browsing. The news comes in a report published by NetMarketShare, which hit the Web recently. As you can see in the below screenshot, the iPad has just passed the one percent mark: The report notes that in the U.S.A., Apple's iPad accounts for double this amount, at 2.1 percent. This is because a large about of Web browsing takes place on mobile devices in the U.S.A. (over 8.2 percent, as opposed to five percent worldwide). What is particularly impressive is how the iPad has proved to be an incredibly popular Web browsing device, not only in the U.S.A. but in the world, too. In a very short space of time, the tablet has assumed a quarter share of mobile Web browsing in the U.S.A., at 25.5 percent. Not bad for a mobile device that isn't even 14 months old. What I find particularly interesting is that Apple's iOS devices are such popular Web browsers, despite their lack of Flash support. When you compare mobile operating systems - iOS vs. Android, or iOS vs. Windows Mobile - the mobile Web browsing share owned by Apple stands at a massive 60.7 percent: Android holds just over half of this, at 31.6 percent, and Windows Mobile holds just 0.2 percent. Despite the persistent reminders stating that Android supports Flash and iOS does not, people are still browsing the Web on iOS more than on Android devices (smart phones and tablets). Apple's mobile operating system is obviously incredibly popular now. Does that mean it can hold out in the long run, too? IDC's forecast isn't all that positive: Recently, the company unveiled that it sees iOS losing market share by 2015, and Android and Windows Phone gaining market share. If you ask me, I would be inclined to say: "Believe that, and you'll believe anything." But that's just the fanboy in me speaking out. Instead, all we can do is sit back and see just how long Apple's mobile operating system can fight off the competition. Remember, Android already bests iOS in terms of smart phone market share (simply due to the mass amount of smart phones the OS is present on), though this is decreasing. All we know for certain is that, in terms of Web browsing, iOS comes out on top. And with the improvements Apple has made to Safari for iOS in iOS 5, you can only expect the experience to get better. We'll keep you posted. [via The Register] 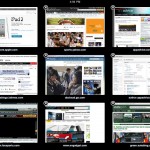 Apple's iPad Accounts For One Percent Of World's Web Browsing

Apple's iPad Accounts For One Percent Of World's Web Browsing
Nothing found :(
Try something else