You are using an outdated browser. Please upgrade your browser to improve your experience.
by Joe White
August 26, 2011
You may be growing tired of iPhone 5 leaks and rumors, but the latest images to hit the Web (via MacPost) are quite interesting - and could indeed be legitimate images of the fifth generation iPhone's back cover. The cover is labeled "EVT" ("Engineering Verification Test"), and also features the model number "N94" - this is referenced in the SDK, too, as far back as iOS 4.3. Earlier today, we told you about the casing images of a purported "iPhone 4S" smart phone, which Apple is expected to release alongside the fifth generation handset. This iPhone is supposed to look similar to the current iPhone 4, while other publications have noted that Apple's fifth generation iPhone isn't going to look much different from its predecessor, either. Because of this, even if the above image is legitimate we're still stuck wondering whether the cover belongs to a prototype iPhone 4S or iPhone 5. In the past, we've heard that the "N94" model referenced in the SDK will sport an A5 processor - the likes of which we've already seen on the second generation iPad. Does this mean that the above image is of an iPhone 5's back cover? This could be. Though nothing has been confirmed by Apple yet, and do remember we've seen a variety of other design rumors, too. Personally, I'm expecting to see an iPhone 5 with an A5 processor and improved cameras. However, when it comes to the design of the handset itself, anything could happen. Let us know your thoughts in the comments. 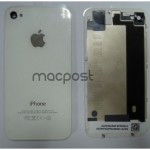 Did The Images Of An iPhone 5 Back Cover Just Hit The Web?

Did The Images Of An iPhone 5 Back Cover Just Hit The Web?
Nothing found :(
Try something else