You are using an outdated browser. Please upgrade your browser to improve your experience.
by Casey Tschida
November 16, 2011
Today's update to Camera+ marks the end of one wild ride for Tap Tap Tap and some of their dearest fans. After more than a year of fighting, the VolumeSnap feature returns once more, and this time it should be for good. What is VolumeSnap? It's the option of using the volume buttons on your iPhone to activate the camera shutter instead of the virtual button. The choice was meant to allow a more traditional control and make it much easier to perform stable photography in certain situations. It really does seem like an obvious feature. However, VolumeSnap was an idea too far ahead of its time in regard to the iOS realm. It all began back in June 2010 when Tap Tap Tap blogged about the submission of Camera+ v1.0, which was rejected by Apple's review team because of the VolumeSnap feature and its violation of iPhone app guidelines. Still disgruntled about Apple's decision, Tap Tap Tap later submitted an update with VolumeSnap, only to be denied a second time. It was on this occasion, the developer chose to fight for a change in policy with some help from consumers. In a move that would ultimately backfire, a dark secret quickly spread across the blogosphere and discussion forums about how to enable the feature that Tap Tap Tap apparently stashed away as an alternate offense. Of course, the explosive coverage resulted in the removal of Camera+ from the App Store virtual shelves. Fast forward to June of this year when iOS 5 was announced at this year's Worldwide Developers Conference. The new mobile Apple operating system contained a ton of new features and revisions to current ones. Amongst those numerous new abilities, yep, the option to press the volume button to activate the camera shutter when using Apple's own Camera app. One would expect Tap Tap Tap to be furious about this, although, a blog entry a few days after the iOS 5 announcement expressed a reflection with a glass half full attitude.

But now in iOS 5, Apple seems to have reversed their “user confusion” stance and they’ve actually included a feature just like our VolumeSnap in their own Camera app. So this makes us very hopeful that we’ll be able to include VolumeSnap in Camera+. Keep your fingers crossed…

Nearly a year-and-a-half has gone by with plenty of ups and downs, finger crossing, cheers, teeth gritting, and all kinds of excitement. But it seems this roller coaster ride has come to the end, and Tap Tap Tap looks to be stepping off with a smile proclaiming, "VolumeSnap is back, beyotches!!" If you don't yet have a copy, Camera+ is designed for iPhone and iPod touch running iOS 4.0 or later, and available in the App Store for $0.99. [Image credit Tap Tap Tap] 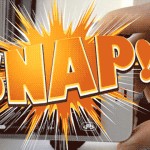 Tap Tap Tap Announces The Triumphant Return Of VolumeSnap For Camera+
Nothing found :(
Try something else