You are using an outdated browser. Please upgrade your browser to improve your experience.
by Brent Dirks
February 14, 2012
The fabled iPad mini apparently is not dead yet. After years of rumors and speculation that Apple would offer a tablet in a size other than the familiar 9.7-inch form factor, a report in The Wall Street Journal today says that Apple and suppliers are testing a tablet with a smaller screen. Unnamed suppliers in the article said that Apple officials have shown off a prototype tablet sporting what looks to be around an 8-inch screen. LG Display Co. and AU Optronics are reportedly providing the display panels for the prototype. Apple often works with suppliers on different form factors and could possibly decide not to go forward with the prototype. Apple has been criticized in some quarters for not broadening its iPad lineup to take on newcomers in the tablet space like Amazon’s Kindle Fire, which at $199 is $300 less than the basic iPad. But in the recent quarterly earnings call, CEO Tim Cook said that the Fire had no adverse effect on iPad sales or rate of adoption. And a recent report showed that Fire sales were dwarfed by iOS devices. And Steve Jobs himself famously in 2010 railed against smaller tablet sizes, saying among other things, that 7-inch versions are “dead on arrival.” “This size isn’t sufficient to create great tablet apps, in our opinion,” Jobs said in a 2010 earnings call. “While one could increase the resolution of the display to make up for some of the difference, it is meaningless unless your tablet also includes sandpaper, so that the user can sand down their fingers to around one quarter of their present size.” The report comes on the heels of an all-but-confirmed date of March 7 for an announcement regarding the iPad 3. The new flagship tablet will reportedly feature a higher-resolution, Retina display and 4G LTE connection options. What do you think about an iPad with a smaller screen? Would you buy one? Or should Apple take the same path with the iPhone and continue to offer the iPad 2, but with a lower price point? (Image via Fast Company) 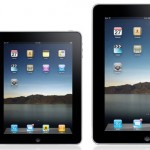 Apple Reportedly Testing iPad With Smaller Screen
Nothing found :(
Try something else