You are using an outdated browser. Please upgrade your browser to improve your experience.
by Joe White
March 4, 2012
In a YouTube video that recently hit the Web, M.I.C. Gadget shows-off what it claims to be an assembled iPad 3, and compares the yet-to-be-announced product with its predecessor, the iPad 2. The parts M.I.C. Gadget has assembled include a purported iPad 3 front glass, rear shell and a series of third-party cases. Its assembled iPad 3, the video notes, is slightly thicker than the iPad 2 though the Smart Covers we already know and love do work with Apple's third-generation iPad, M.I.C. Gadget asserts. Besides the slightly thicker shell, the iPad 3 also appears to have a larger camera lens, and a slightly more tapered design. However, when comparing the two iPads - the iPad 2 and iPad 3 - side by side, you can see in the video that both products look very similar. Apple's iPad 3 - which the company is expected to announce on March 7, at a special media event - is said to launch with a Retina display, an improved processor and a new set of cameras. In terms of design, we have heard that the iPad 3 will indeed look rather a lot like the iPad 2 - though fortunately we've also heard that Apple will maintain its pre-established iPad price structure with the third-generation product. Below, we've included the aforementioned video. Take a look at it - and remember to check back with us on March 7 for all the information on Apple's iPad 3 event. 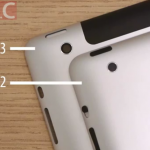 New Video Claims iPad 3 Is Slightly Thicker Than iPad 2, But Will Support Smart Covers
Nothing found :(
Try something else