You are using an outdated browser. Please upgrade your browser to improve your experience.
by Bryan M. Wolfe
April 11, 2012
In recent weeks, companies many consider too large and/or obtrusive for their own good took over two of the most popular independent development companies in iOS. However, before Zynga acquired OMGPOP and Facebook bought Burbn, Inc., Zite became part of CNN. Yes, that CNN, the international news leader, which bought Zite for a reported $20-25 million. While we don’t yet know what changes will come to OMGPOP’s popular Draw Something app or to Instagram, the outstanding photo app created by Burbn, the Zite/CNN partnership does suggest not all acquisitions are bad.

To clarify, I wasn’t thrilled when CNN announced in August that Zite was being added to its list of properties. Originally launched in March 2011 by a team of researchers at the University of British Columbia’s Laboratory for Computational Intelligence, Zite is unlike any news app on the planet, since it uses an algorithm to tailor the news based on a users’ interests and reading patterns. This is why when Zite announced its new Publisher Program earlier this month, I officially called Zite out for (finally) going “corporate,” and not necessarily in a good way. After all, when one of Zite’s first “premium” content providers is CNN, to me anyway, the writing was on the wall. Zite recently moved to new headquarters in San Francisco, California.

Not so fast, said Zite CEO Mark Johnson, who tracked me down just hours after my original post was published. According to Johnson, the Publisher Program came to be as a way to end a long-running feud between Zite and some publishers, plus give customers additional tools to find the news that may interest them most. Soon after Zite went online, a number of publishers, including The Washington Post, AP, and Gannett, among others, filed a cease-and-desist letter against Zite claiming copyright infringement. After all, Zite’s biggest selling point is that it offers news from various sources, but without their ads or branding. “Users like specific publications and Zite wants to work more closely with publishers,” says Johnson. Besides, “adding the specific content remains optional.” The Zite Publisher Program allows users to add content from the Bleacher Report, CNN, The Daily Beast, FOX Sports, HLN tv, The Huffington Post, Motley Fool, The Next Web, and VentureBeat. Besides, Zite remains committed to its unique algorithm. Unlike other apps such as Flipboard and Pulse that take an "all or nothing" approach to giving you the news, Zite will only show you the articles that will interest you most. Says Johnson: “Our goal is not to give you everything (from a publisher.) Just the news YOU might be interested in.” While the Zite Publisher Program only includes content from some of the world’s largest media companies, that could eventually change. Smaller and medium-sized organizations will someday come, says Johnson. Finally, the Publisher Program is also an attempt by Zite to generate more revenue. Says Johnson, speaking to TabTimes:

Clearly our relationship with publishers is critically important. Publishers want to be paid for content, users want easy access to the things they want to read, and we match that up. The other part of this is that we’re looking at where we can generate revenue. We’ve announced sponsors, including content that’s promoted by Intel.

Since day one, Zite has been committed in giving readers a new way to discover content online. And that hasn’t changed. “We are very independent still," Johnson concludes. "Although I talk to CNN (in Atlanta, Georgia) often, we sit firmly in the Bay area." Now, lets hope Zynga and Facebook don’t become too intrusive with their new hires. What do you love about Zite? Any thoughts on what should be added to the news service? 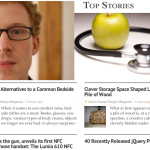 Zite's Acquisition By CNN Proves Not All Takeovers Are Bad

Zite's Acquisition By CNN Proves Not All Takeovers Are Bad
Nothing found :(
Try something else