You are using an outdated browser. Please upgrade your browser to improve your experience.
by Brent Dirks
May 5, 2012
Not surprisingly, here at AppAdvice, we do a lot of writing. But while the iPad excels at many different tasks, writing has never been the tablet's strong suit. I've seen many interesting add-on keyboards for the iPad like the ClamCase, ZaggFolio, and Brydge Kickstarter project. But I was always turned off by the compromises that were required – especially on the size and weight fronts. Normally, for any iPad writing sessions, I simply lug around my Apple Wireless Keyboard. But I was very intrigued when Logitech recently announced its new Ultrathin Keyboard Cover. As the name suggests, the solution promises to combine a Smart Cover experience with a built-in keyboard on the other side to help make iPad productivity that much easier. So, to dive in head first, I've been using Logitech's product the past week for the bulk of my writing (including this review), and have generally liked the experience so far.

Overall, the keyboard cover is very thin doesn't add much weight when attatched to your iPad via a magnetic hinge. The front cover is composed of Apple-inspired silver metal while the keyboard side is a piano-black finish. Past the top of the keyboard is the slot designed for a non-covered iPad in the landscape position. The slot, which has some rubber lining for protection of your iPad, only allows one angle – about 30 degrees. While I was a little disappointed at first that I couldn't situate my iPad exactly how I would like, the angle was a nice compromise and hasn't caused me any problems. My iPad is also held very firmly in place while typing, which is very nice to see. Connection between keyboard and iPad is achieved with Bluetooth. On the right side, there are buttons for pairing, turning the keyboard on and off, and a micro-USB slot for charging. With two hours of use per day, Logitech promises that the rechargable battery will last for around six months before needing recharged. Managing the keyboard has been a learning experience. The keys are a little smaller than normal, but after spending a little bit of time getting used to typing, it's easy to navigate. Featuring nice, high-contrast letters and numbers, the comfortable keyboard should look very familiar to any Mac user. Along with the normal three rows of letters and symbols, there is a number/function row on top and a group of function, control, option, and command keys that go along with the space bar on the bottom row. I've also found some of the iPad-specfic function keys on the top row to be very handy. Along with a dedicated homescreen button, the select text right and select text left keys have been very simple and helpful when trying to cut-and-paste text with the cursor.

While it's been a good experience so far, there are some tradeoffs. Even though the keyboard is generally good, it does take a little bit of getting used to before you can type like normal. My biggest gripe on the typing experience centers on the extra-tiny delete button. It's the same size as the number keys and very bothersome to master. While Logitech's solution covers the front of your iPad, the back is still left without any protection. Even though the hinge connects to the side of the iPad just like a Smart Cover to allow for the automatic on-and-off function, the cover doesn't swing to the back of the iPad while just using the tablet. So, you have to reattach the cover each time you are finished working with the iPad, which is a little annoying. The finishes of both the keyboard and front cover are also not very ideal. While the front and back look great out of the box, after a few days, the keyboard side turns into a huge fingerprint magnet. Thankfully, Logitech was insightful enough to include a cleaning cloth for apparently that reason. I do also wonder how well the metal front will hold up over time with use, and whether it will be able to fend off scratches.

Even though there are more than a few options for users looking leverage the feel and function of a real keyboard while using the iPad, Logitech's Ultrathin Keyboard Cover does an excellent job and has quickly become one of my favorite accessories. I still will rely on my SwitchEasy Canvas folio case for day-to-day use, but Logitech's solution is a very compelling alternative. While I prefer a little bit more protection of my iPad, the keyboard case is so small and thin, I'm planning on carrying it my gadget bag full time. The Logitech Ultrathin Keyboard Cover is $99.99 and can be preordered directly through Logitech. Amazon is quoting a 1-3 month ship time for the keyboard, though I have seen the unit in stock at some Best Buy locations. 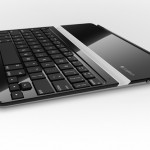 Logitech Ultrathin Keyboard Cover Comfortable, Easy To Use
Nothing found :(
Try something else