You are using an outdated browser. Please upgrade your browser to improve your experience.
by Bryan M. Wolfe
July 9, 2012
For those who felt Apple’s Worldwide Developers Conference last month was ho-hum at best, be prepared for a “crowded event” from Cupertino this fall. In addition to announcing the sixth-generation iPhone, Apple could use their September or October event to unveil the long-rumored iPad “mini” and much more, according to Gene Munster with Piper Jaffray. Munster’s comments were first published by AppleInsider. According to the investor, Apple is likely prepping a 16GB iPad “mini” that could launch for $299. With this, Apple could sell 6 million units of the new iDevice this holiday season. In launching the smaller iDevice, Cupertino would “eliminate two of the biggest features for Android tablet makers in price and size.” In doing so, Munster expects Apple to retain their tablet dominance for at least the next four years and not significantly hurt sales of the company's current line of iPads. He believes the introduction of a smaller iPad would cannibalize 10 percent of Apple’s existing tablet sales. At the same time, the iPad “mini’s” entry would take away 30 percent of total Android tablet sales in the December quarter. Munster also said the $299 price point for the "mini" sounds about right, given the price of current Apple products. For example, the 8GB iPod touch sells for $199, while the iPad 2 is available for $399. The often quoted investor also believes Apple will use their fall event to launch a fourth-generation Apple TV set-top box. The current model launched in March priced at $99.

We’ll keep you updated on all of the Apple rumors heading into the company's still to be announced fall event. In the meantime, be sure to check out some of our most recent reports on what products could debut in a matter of a few weeks. These include: What are you expecting Apple to unveil this fall? Source: AppleInsider Photo: BGR 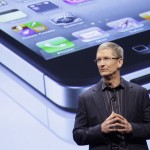 Apple's Fall Event Could Be 'Crowded' With Lots Of New Products

Apple's Fall Event Could Be 'Crowded' With Lots Of New Products
Nothing found :(
Try something else