You are using an outdated browser. Please upgrade your browser to improve your experience.
by Aldrin Calimlim
July 31, 2012
Facebook has finally introduced an Instapaper-like feature. The new feature, which was first pointed out by iMore, lets users save posts shared on Facebook for later. Facebook's save-for-later feature appears to have been simultaneously launched on the social network's full site and its mobile versions. Its official iOS client is, of course, included in the rollout. Apparently, no official announcement has been made regarding the new feature. But users are notified of its effectivity through a pop-up that doubles as a brief instruction. On Facebook's full site, you can save a post for later by clicking "Save" in that post's dropdown menu. Shortly after saving your first post, a new "Saved" tab will appear under "Favorites" in your sidebar. You can access your saved posts by clicking the "Saved" tab. On the official iOS client of Facebook, saving posts entails a slightly different method. To save posts for later in Facebook for iOS, just tap and hold anywhere on a post. Before long, a "Save" button will appear. Tap this button to complete the saving process. Now, to see your Saved posts in Facebook for iOS, you first have to swipe the sidebar into view. Then, scroll all the way to the bottom and tap "Edit Favorites." Tap "+" and select "Saved" among your apps list. Thereafter, you can access your saved posts by tapping "Saved" under "Favorites" in the sidebar. I'm not really into Facebook, but I can definitely see the value of this new feature to those who are. For one thing, users can now save stories they're interested in while browsing through their often jumbled news feeds — just as I save links I'm interested in to Readability while going through my Twitter timeline in Tweetbot. Facebook's save-for-later feature appears to have gone live for a limited number of users only. But it should make its way to others pretty soon. Note that you need not update the Facebook app on your iPhone or iPad to get the new feature. Like App Center, it's integrated into the app behind the scenes and on the server side. Oh, and in case you're wondering (of course, you are), saved stories are private. Rest assured that no one else can know that you're continuously saving stories about Justin Bieber or One Direction. Source: Facebook Via: iMore 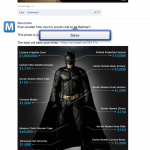 It's No Instapaper, But You Can Now Save Posts For Later In Facebook For iPhone And iPad

It's No Instapaper, But You Can Now Save Posts For Later In Facebook For iPhone And iPad
Nothing found :(
Try something else