You are using an outdated browser. Please upgrade your browser to improve your experience.
by Brent Dirks
August 22, 2012
While a bevy of parts from what appear to be the next-generation iPhone have been leaked and photographed in the past few weeks, iLounge reports on an interesting shot of what is apparently the new handset’s charge/sync cable complete with the smaller dock connector. The site was alerted to the above picture via Twitter from Veister.com, an accessory vendor based in Shenzhen, China. It’s unknown whether the picture is of a genuine Apple part or simply a cheap replacement accessory. But the cable looks very similar to previous generations of the accessory with a full-sized USB plug on one end and the rumored smaller dock connector with either eight or nine pins. The new iPhone, complete with the smaller dock connector, is expected to be announced at an event on Wednesday, Sept. 12 with the handset going on sale a little more than a week later on Friday, Sept. 21. And a recent rumor speculated that Apple may unveil an entire new line of iOS devices – including an" iPad mini" and a new iPad – with the smaller dock connector at the event. With Veister.com being based in the same city where the new iPhone is being manufactured, I think it’s a pretty safe bet to say new iPhone owners will be seeing something very close to this when they unbox their new handsets a little less than a month from now. Source: iLounge 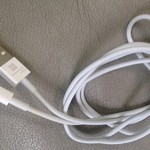 Apparent Next-Generation iPhone Charge/Sync Cable Pictured For The First Time
Nothing found :(
Try something else