You are using an outdated browser. Please upgrade your browser to improve your experience.
by Brent Dirks
August 2, 2012
Thanks to record iPad sales, Apple’s share of the tablet market rose in the second quarter of 2012 to 68 percent, according to recently released analysis from IDC. In the most recent quarterly results, announced early last week, Apple sold 17 million iPads. That is an 84 percent increase from the same period last year and an all-time record for any quarter. For comparison, Apple sold 11.8 million tablets in the first three months of 2012.

"Apple built upon its strong March iPad launch and ended the quarter with its best-ever shipment total for the iPad, outrunning even the impressive shipment record it set in the fourth quarter of last year," said Tom Mainelli, research director, Mobile Connected Devices. "The vast majority of consumers continue to favor the iPad over competitors, and Apple is seeing increasingly strong interest in the device from vertical markets—especially education. While iPad shipment totals are beginning to slow a bit in mature markets where the device saw early traction, growth in other regions is clearly more than making up the difference."

Samsung, who is in the middle of a contentious patent infringement trial with Apple, rebounded strongly in the quarter to nab second place with 9.6 percent of the market on 2.4 million units shipped. Amazon was third with 5 percent of the market on 1.2 million units of its Kindle Fire shipped. And the report comes on the heels of new numbers that said if the iPad is considered a PC, Apple held 19 percent of the worldwide PC shipments in the most recent quarter. With the new iPad mini almost for certain to make its debut before the end of the year, it should be an interesting next few months in the tablet market. How do you think these numbers will look in the next quarter? Can Apple hold off the Nexus 7 and Microsoft Surface? 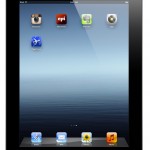 Guess Who Has Taken A Bigger Bite Out Of The Tablet Market?

Guess Who Has Taken A Bigger Bite Out Of The Tablet Market?
Nothing found :(
Try something else