You are using an outdated browser. Please upgrade your browser to improve your experience.
by Bryan M. Wolfe
February 27, 2013
For many years, The Beatles catalog remained noticeably absent from iTunes. When music from the Fab Four finally arrived in Apple’s music store in November 2010, it ended years of rumors going back nearly a decade. The Microsoft Office to iOS rumors remind me a lot of the stories once written about Britain’s most popular export coming to iTunes. Unfortunately, for Microsoft anyway, CEO Steve Balmer can’t carry a tune like The Beatles. The latest news about Microsoft Office’s possible arrival on iOS sounds a lot like previous reports written on the subject over the years, but with a strange twist. Like others times, a Microsoft executive is asked about it and instead of answering the question, sidesteps it. Speaking to Reuters, Kurt DelBene, the head of Microsoft’s Office unit, would only say that his company has “done a lot of work on iOS devices this time around.” But he isn't talking about a native Office app. Instead, he said that “we have enhanced the Web applications pretty substantially, in partnership with Apple.” This is the first time that we’ve heard about a partnership between the two technology heavyweighs with regards to Office. It comes just a few weeks after news surfaced that Ballmer was hoping that Apple would make an exception and not charge Microsoft the 30 percent cut they receive from other developers. While possible, I can’t think of a reason Apple would be working with Microsoft to “enhance” Office for the Web. After all, this provides absolutely zero revenue for Cupertino. A Microsoft Office app for iOS would be a great thing, and I believe quite popular. Still, these will they, or won’t they stories that pop up every few months have long ago passed their freshness date. As I said in December, Apple shouldn’t give into Microsoft’s demands. By doing so, it would be like a kick in the mouth to every other iOS developer. On Ballmer, I say let him continue to twist in the wind and sing his old tune. Apple and iOS seem to be doing just fine without Microsoft Office. If you really want to read previous Microsoft Office to iOS rumors, see: References To Office For iOS Found On Microsoft Support Site, Microsoft Confirms Office Mobile Coming To iOS, and Microsoft’s Ballmer Talks Office For iOS And ‘Small’ Number Of Dropbox Users. 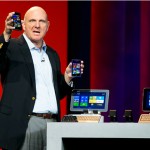 Microsoft’s Ballmer Talks Office For iOS And ‘Small’ Number Of Dropbox Users
Nothing found :(
Try something else