You are using an outdated browser. Please upgrade your browser to improve your experience.
by Brent Dirks
June 18, 2013
Bringing the popular board game into the digital word, developer Full Control has announced that Space Hulk will be hitting the App Store this fall. Recreating the classic board game experience set in the Warhammer 40,000 universe, the turn-based strategy title takes place in the isolated corridors and small chambers of an ancient vessel lost in deep space. Gamers are tasked with leading a small army of ferocious Space Marine Terminators to battle against a large number of predatory alien Genestealers. Based on the “Sin of Damnation” campaign from the third edition of the board game, Space Hulk will feature both a 12-mission single-player or co-op campaign. Multiplayer mode will see gamers go head-to-head as one player controls the Space Marines and the other helms the Genestealers. And along with the iOS version of the game, Space Hulk will also be released on the Mac and PC, allowing for a cross-platform, multiplayer experience to compete against friends. The level editor in the game will also allow players to design their own level, share with others online, and in a central hub accessible by the community. For more of today’s app news, see: Wake N Shake Alarm Clock 4.0 Features iOS 7-Ready Interface Overhaul, Seesaw For iPhone Gains New Publishing Process Enhanced With Online Photo Search, New Sunrise Calendar Update Emerges With Foursquare And Google Maps Integration, and Freeze! Popular Strategy Game Clash Of Clans Updated With 'Cool' New Battle Spell. 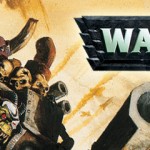 New Warhammer 40,000 Strategy Game Is Announced
Nothing found :(
Try something else