You are using an outdated browser. Please upgrade your browser to improve your experience.
by Joe White
July 31, 2013
Shadowrun Returns is indeed set to make the leap to Apple's mobile operating system, but while the popular card game is available for a number of platforms already, its launch in the App Store has reportedly been delayed by a couple of weeks. In an email sent to TouchArcade, Harebrained Schemes explains:

While we wanted to get the mobile tablet versions out at the same time as the PC and Mac versions, our main priority is creating the best game possible on all platforms. To that end, we are going to delay the tablet versions for a few weeks to make sure that the game meets all our high expectations and delivers the best gaming experience possible on mobile tablets, so we have not announced a release date for iOS yet.

Of course, it's essential for both Harebrained Schemes and the app's ultimate user base that Shadowrun Returns is ready for the App Store once it's released, and so a delay of a couple of weeks ultimately isn't such a bad deal. Unlike the developer of XCOM: Enemy Unknown, it seems Harebrained Schemes is dedicated to releasing Shadowrun Returns only when the game is ready, and for that the developer should be commended. We'll let you know once Shadowrun Returns launches in the App Store. In the meantime, see: Google Maps Co-Creator And Google App Engine Founder Team Up For New Quip App, Cydia Tweak: Control Unlocker Changes The Game For Passcodes, and Adobe Ideas For iOS Updated With Stroke Smoothing, Direct Sharing And Stylus Support. 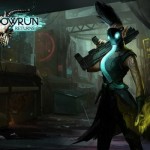 Shadowrun Returns: Popular Card Game Makes The Leap To iOS Next Week
Nothing found :(
Try something else