You are using an outdated browser. Please upgrade your browser to improve your experience.
by Joe White
July 29, 2013
Cult classic Sine Mora, which recently made the quantum leap to iOS, has received an update. Now, in version 1.1 of the $5.99 app, users can enjoy a brand new control scheme, improved graphics, and enhanced performance. As a reminder, Sine Mora "is a side scrolling shoot 'em up game that mixes classic arcade action with storytelling adventure," according to our original review of the application. Players command a fighter plane, and must shoot down enemies using an array of weaponry while progressing - horizontally, of course! - through level after level. In version 1.1 of the game, developer Digital Reality Software Kft has made a number of changes to Sine Mora, including: Furthermore, a selection of more minor performance improvements have also been made to the app: If you're a fan of side-scrolling shoot 'em ups, check out Sine Mora 1.1 now. As mentioned, the application is available to download in the App Store for $5.99, and is optimized for the iPhone, iPad, and iPod touch. See also: Ahead Of iOS 7's Launch, Apple Gives Free iBooks To Its Employees, Bob Mansfield Leaves Apple's Executive Team To Work On Special Projects, and Performance Comparison: Nexus 7 Versus iPad mini. 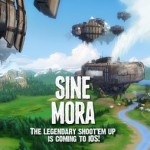 Cult Classic Sine Mora Appears, Disappears Then Reappears In The App Store
Nothing found :(
Try something else