You are using an outdated browser. Please upgrade your browser to improve your experience.
by Joe White
August 2, 2013
Apple's search for a new senior vice president of Retail is taking the Cupertino, Calif. company longer than expected. You'll remember that John Browett (pictured above), the newest member of Apple's executive team and appointed head of retail stores back in May last year, swiftly left the company following a disastrous couple of months. Since, Browett's position has been open, but Apple isn't rushing to hire a new senior vice president of Retail by employing any old candidate. Instead, as The Wall Street Journal reports in a recent article, Apple is considering only external candidates - outsiders - for the position, but so far hasn't found the right fit:

Apple's search for a replacement, handled by recruiters Egon Zehnder International, has gone slowly, people familiar with the matter said, and the company has yet to settle on a finalist after interviewing several external candidates. Among those interviewed but rejected as a poor fit were wireless and telecommunications-industry executives, one such person said. A CEO of a privately held retailer in France spurned Apple's overtures, believing it would be hard to change Apple's culture as an outsider, another person said. Apple doesn't consider internal candidates to be an option, according to a third person familiar with the matter.
Apple suppliers are gearing up for mass production of a new iPad mini that will likely feature a high-resolution screen from Samsung. The WSJ's Lorraine Luk talks about what consumers can expect in the next iPad mini.
Some potential retail chiefs are wary about taking charge of Apple stores because they say the top brass hasn't been clear about plans, said one tech-industry recruiter who knows Apple well.

To add further pressure, Apple Retail Stores just reported their first drop in sales in four years. Craig Johnson, the head of Consumer Growth Partners, is calling for the company to reinvent itself once again with regards to its band of Apple Retail Stores: "Apple needs to recreate and reinvent its once novel retail model, which is now not so novel," he said. Former retail employees agree, noting that in previous years Apple Retail Stores saw important, innovative changes occurring every quarter; now, however, this is no longer the case. Of course, the Apple Online Store doesn't exactly persuade customers to walk down to their local Apple Retail Store, and to purchase products in person. In some ways, it could be said that this is merely another instance of retail losing out due to the growth of online shopping. That being said, the Apple Retail Store is everyone's local Apple "hub," and it's important for the company to maintain this image. It'll be interesting to see how (or, rather, if) Apple's new senior vice president of Retail is able to rejuvenate the company's worldwide stores. We'll let you know once a new executive is appointed. In the meantime, see: In Addition To Search, Khan Academy Now Enhanced With Offline Viewing For iPhone, Best Buy Offering Free Apple TV With Retina-Equipped MacBook Pro Purchases, and Traverse The Great Train Tracks Of China In Subway Surfers' New World Tour Stop. 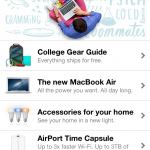