You are using an outdated browser. Please upgrade your browser to improve your experience.
by Brent Dirks
August 26, 2013
Apple’s ubiquitous personal assistant, Siri, has now been updated to take some thinly-veiled jabs at Google Glass. Uttering the phrase “Okay Glass,” which activates Google’s wearable technology, will elicit a range a of funny responses from Siri in iOS 7 beta, including:

“Just so you know, I don’t do anything when you blink at me.” “Stop trying to strap me to your forehead. It won’t work.” “I’m not Glass. And I’m just fine with that.”

As first spotted by The Verge, the iOS 6 version of Siri also comes back with:

“I think that Glass is half empty.” “Glass, I think you’ve got the wrong assistant.”

As we reported earlier this year, Apple was planning to make Siri wittier, and it looks like they are doing a nice job with that goal. In iOS 7, which is expected to be released sometime in September, Siri has received a number of other enhancements. Along with a more “human” sounding voice, users can also select a male or female voice for Siri. For other recent Siri news, see: Siri, Spotlight Search And Notification Center Revamped In iOS 7 Beta 4 and Apple Is Forming Its Own Speech Technology Team With Former Nuance Employees. 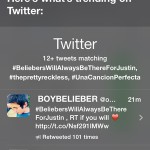 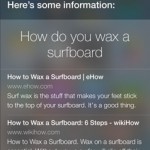 Apple Is Forming Its Own Speech Technology Team With Former Nuance Employees
Nothing found :(
Try something else