You are using an outdated browser. Please upgrade your browser to improve your experience.
by Aldrin Calimlim
October 21, 2013
Apple has just begun airing its first TV ad for its new flagship handset, the iPhone 5s. And just like its recently launched print ad campaign, the new commercial touts the device's gold color choice as well as its new Touch ID feature. Titled "Metal Mastered," the new ad shows liquid gold gradually forming a gold iPhone 5s. It's actually quite reminiscent of Apple's first TV ad for the iPhone 5c, titled "Plastic Perfected," which features the "beautifully, unapologetically plastic" device's fun candy colors. Both ads appear to be condensed versions of the introductory video shown by Apple during its iPhone event last month. If you can't see the video embedded above, please click here. The new ad concludes with the iPhone 5s being unlocked with just a touch of a finger, thanks to the device's Touch ID fingerprint-scanning feature. Just like the iPhone 5c's first TV ad, which was set to "Rill Rill" by Sleigh Bells, the iPhone 5s' first TV ad is set to a popular song with its share of apt lyrics. It features "Ooh La La" by Goldfrapp (yup, it's all about the gold), which includes the following verses: "Dial up my number now / Weaving it through the wire / Switch me on / I want to touch you / You're just made for love." It's worth noting that the ad includes a disclaimer toward the end stating that the iPhone 5s is "subject to availability." Indeed, the iPhone 5s remains difficult to come by. What's more, it has been suggested that the iPhone 5s is three times more popular than the iPhone 5c, to which Apple has dedicated much of its advertising efforts since the two devices' launch. 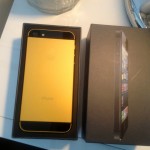 Apple's Most Popular iPhone 5s Is ... 'The Kardashian Phone?' 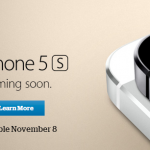 US Cellular To Offer Apple's iPhone 5s, iPhone 5c From Nov. 8
Nothing found :(
Try something else