You are using an outdated browser. Please upgrade your browser to improve your experience.
by Joe White
October 8, 2013
Apple's OS X Mavericks might have only just reached its Gold Master stage of development, but the Cupertino, Calif. company is already internally testing forthcoming updates for its Mac operating system, according to a recent report. Prerelease builds of OS X 10.9.1, along with OS X 10.10 - which is codenamed "Syrah" - are reportedly being released to Apple employees on a nightly basis, in order for the software to receive a degree of internal testing. The news reached us from 9to5Mac, which published proof in the form of the above screenshot earlier. The website explains:

We’re told that a small seeding round began in early September, and that the seeding has picked up in recent days and weeks. Perhaps as proof for this, page views to 9to5Mac.com from computers running OS X 10.10 have increased in recent days. An image from our Google Analytics is shown above. One or two new 10.10 builds become available for employees each weekday.

Below, we've included the image mentioned. Apple's OS X 10.10 is said to bring a new, iOS 7-inspired design to the Mac operating system, however the update isn't expected to launch until late 2014. Before this, OS X Mavericks, which adds an iBooks app, a Maps app, enhanced AirDrop, and Notification Sync to the OS, will reach Mac owners. From what we understand, this could occur as soon as mid-October. We'll keep you updated with further information as we receive it. In the meantime, see: Pocket Village Updated With New Halloween Decorations And Other Enhancements, It's iPhoneography: NatGeo Photographer Captures Scotland With His iPhone 5s, and Popular Task Management App Todoist Updated To Version 7.0 For iOS 7.

The AppAdvice Week In Review: Apple Is Getting Ready To Trick Or Treat Fans 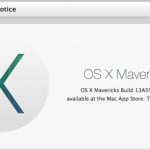