You are using an outdated browser. Please upgrade your browser to improve your experience.
by Joe White
November 10, 2013
Apple's next-generation iPhones could feature curved displays and advanced sensors, according to a new report from Bloomberg. The publication claims that the handsets, Apple's successors to the iPhone 5s and iPhone 5c, are expected to feature 5.5- and 4.7-inch screens, respectively. As such, the new smartphones will be more in-line with the Android-powered Samsung Galaxy Note 3 and Galaxy S4, providing consumers with the "phablet" iPhone many have previously called for. Citing information provided by "a person familiar with the plans" of the Cupertino, Calif.-based Apple, Bloomberg reports:

Two models planned for release in the second half of next year will feature larger displays with glass that curves downward at the edges, said the person, declining to be identified as the details aren’t public. Sensors that can distinguish heavy or light touches on the screen may be incorporated into subsequent models, the person said.

The article provides little more information concerning the anticipated handsets, however. Bloomberg's news comes following several years of rumors concerning curved iPhone handsets. First, we heard more than two years ago that a curved iPhone was in the works, and one year later a new report claimed that the iPhone 5 would offer users a curved design. That didn't happen, of course. But more recently, curved battery research purportedly undertaken by Apple indicated that curved screens could adorn a future iPhone - and even a future Apple-designed smart watch. Finally, a similar-timed report concluded that a "phablet" sized iPhone - if one indeed launches - won't arrive until 2014, at the earliest. If Bloomberg's sources are to be believed, however, it could be that two larger iPhones, rather than just one, are in the cards. We'll keep you updated with further information as we receive it. In the meantime, see: Today's Best Apps: Laser Match And Paofit, Quirky App Of The Day: Help Chickarus Fly In Chick-A-Boom, and Move Text Around Like It's Nobody's Business With Evercopy. Image credit: Ciccarese 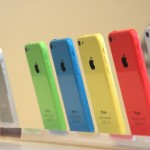 Only A Small Percentage Of Previous iPhone Owners Upgraded This Year

Boost Mobile Is Now Offering Huge Discounts On Apple's iPhone 5s And iPhone 5c
Nothing found :(
Try something else