You are using an outdated browser. Please upgrade your browser to improve your experience.
by Joe White
December 8, 2013
It seems microsuction is really taking off when it comes to iDevice accessories. Just a couple of months ago few companies appeared to be using the technology effectively, yet now a bunch have utilized microscopic suction pads to hold iPhones and iPads securely in both cases and even iDevice stands. One of the latest products in this category is Nodus' Access case, which we told you about in a separate article not long ago. The leather iPhone (and iPad mini) Access cases can be preordered using Kickstarter from $64, and users should expect to receive their cases in March next year provided Nodus reaches its funding goal. Thanks to the folks at Nodus, however, we managed to get our hands on the Access case for iPhone 5s ahead of schedule; in this review we take a closer look at the product. Of course, the first point worth making is that the Access case we've got - for the iPhone 5s (and iPhone 5) - is a prototype, and Nodus is in the process of making a few alterations. That being said, the prototype gives us a reasonable idea of how the finished item is going to look and feel. The product, then, is a leather book-like case that, much like Piel Frama's FramaSlim, uses a microsuction pad to secure the handset to one side. In this respect, the product isn't exactly original, but it does make a few departures from similar iPhone and iPad cases. As you'd expect, Access is stitched around the edges and on the inside a soft microfiber lining promises to protect the enclosed smartphone's screen. There's space for the rear-facing camera, and because Access covers only the front and back of one's iPhone, the Lock button, mute button, volume buttons, Lightning port, and speakers are still within easy reach. Of course, this also means that your handset's antenna is exposed to the elements, but in a further departure from Piel Frama's FramaSlim, the Access case is wide enough to allow one's iPhone to be edged further in towards the spine of the case itself. This has its share of positives and negatives, and because users aren't required to place their handset alsongside the case's spine, Access doesn't allow them to interact with the handset's volume keys while the cover is closed. Plus, due to the absence of a space in the case's front cover, it's not possible to engage in calls while the case is closed shut, either. One difference between Access and FramaSlim that's more positive, however, is the presence of an inner pocket, which is stitched into the inside cover of Access and provides enough room to store a few credit cards and some cash. Here, Nodus also includes a second, smaller microsuction pad; rather than using a magnet to attach the cover to the handset, users can instead stick the cover to their iPhone's screen. Personally, I'm not a huge fan of this aspect of Access, and would rather the case used a magnet, like FramaSlim. Though it should be noted that the use of microsuction means the case isn't going to leave a sticky residue on your smartphone's screen. Initially, I also had some trouble getting this cover to actually stick; it kept on springing open, due to the rigidity of the leather itself. After after some use, however, this problem has disappeared. Nodus happened to send over cases for both the iPhone 5s and the Samsung Galaxy S4, and after playing around with both I stored them together, each case empty and closed. It seems this was unfortunate; the two microsuction pads touched on the Galaxy S4 case and upon returning to the product a day or so later, I found after opening the case that the smaller pad was full-on removed from the product by the suction power of its bigger counterpart, breaking the case (as pictured below). We've reached out to Nodus concerning this and will update the article if they have further information on the potential of this happening with the finished product. This problem aside, however, Nodus' Access case looks to be a promising product. The Kickstarter campaign is hoping to amass £20,000, and so far the project is around £1,000 off with 34 days to go. As such, it looks like Access will be funded, meaning your contribution will score you a case if you put forward enough cash. As mentioned, a contribution of $64 will get you Nodus' Access case for iPhone. For more information, take a look at the product's Kickstarter Web page. See also: Review: Carry Your Mac, iPhone And iPad In KNOMO's Slim Satchel Briefcase, Oceanhorn Should Now Look Even Better Running On Your Retina-Equipped iPad mini, and Telltale To Release New Episodic Game Based On HBO's “Game Of Thrones”. 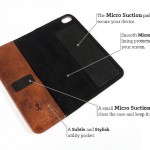 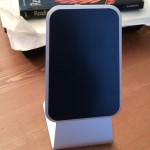 Review: Slope Could Be The Best iPad Stand You’ll Ever Use
Nothing found :(
Try something else