The Gate is a brand new iOS app that promises to combine two popular genres in one game: real-time strategy (RTS) and card collecting game (CCG). Dare you pass through The Gate? If so, the application can be downloaded free of charge in the App Store, and is optimized for the iPhone, iPad, and iPod touch.

Developed by Spicy Horse Games and published by Mobage, The Gate promises iDevice users epic battles, stunning artwork, and a sinister story. As outlined in the app's release notes: “Another soul passes through The Gate only to discover an underworld of demonic armies and infernal battles. Your journey unfolds as you capture disciples and train them in combat.”

The developer and publisher add, “Can you unlock mysterious skill upgrades and build an army powerful enough to help defeat fire-belching world bosses?”

For iDevice users, however, The Gate also offers an exciting mash-up of two fun genres. If you're a fan of both RTS and CCG iOS games, this could be the perfect app for you. But how does this mash-up work in the application itself? Spicy Horse Games and Mobage continue:

The Gate uniquely combines Real Time Strategy (RTS) and Card Collecting Game (CCG) mechanics. Battles are rendered in hand animated 3D while collectable cards are presented as beautifully illustrated artistic masterpieces. Solo battles provide a chance to strengthen your army, while Raids, Arena Battles, and World Bosses get your friends in on fight.

Here's a list of features on offer in The Gate:

Prospective users should be aware, however, that though free to download, install, and play, The Gate comes with its share of in-app purchases. These get quite high (one of the game's “Top In-App Purchases” is for $19.99, for example), and as such parents may wish to disable in-app purchases on their iDevice.

Below, we've included a bunch of screenshots taken from within the application.

Interested? If so, The Gate can be downloaded in the App Store free of charge, and is optimized for the iPhone, iPad, and iPod touch.

Check out the new application now, or for more of our recent news, see: APB Reloaded's Mobile Spinoff To Launch In The App Store This Month, 'Nerds" Is A New Musical Starring A Young Steve Jobs And Bill Gates – AppAdvice, and Sky Force To Land In The App Store In Celebration Of Its 10 Year Anniversary. 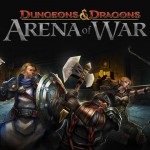 D&D: Arena Of War Is The First Free-To-Play Mobile Dungeons & Dragons Game
Nothing found :(
Try something else