You are using an outdated browser. Please upgrade your browser to improve your experience.
by Joe White
December 16, 2013

It seems no sour taste has been left in the mouths of Apple, Inc. and Apple Corps (or even The Beatles' record label, EMI), concerning the two former companies' to-and-fro legal battles which date as far back as 1978. Because after having first appeared in the iTunes Store back in 2010, we're how hearing that a new album from The Beatles full of rare recordings and bootlegs is set to launch exclusively through iTunes this week.

The album is rumored to be titled “The Beatles: Bootleg Recordings 1963,” and a total of 59 “rare and unheard recordings” from the quartet are said to be included in the collection, TUAW explains. The news originally gained conformation from the British music publication NME, which noted that European copyright law has purportedly motivated the album's release:

EU law protects songs for 70 years after they are recorded, but only if they get an official release. Otherwise, copyright lasts 50 years.

In the case of The Beatles, that means their 1963 debut album Please Please Me is protected until 2033, but the unreleased session tapes for that album are not.

If the Beatles chose not to release the recordings before the end of the year, it would mean other record labels could theoretically put them out and profit from them.

Rumored to be Steve Jobs' favorite band, a bunch of ringtones from The Beatles launched exclusively through iTunes last year; more recently, however, we have seen singer-songwriter Beyoncé release an exclusive “visual album” in the iTunes Store, which included 14 tracks and a number of videos.

The move was entirely unannounced and downloads of the album reportedly crashed Apple's servers. It forms part of a growing trend of “guerrilla releases,” whereby musicians release unannounced singles and albums through digital platforms (usually the iTunes Store) for reasons of their own. Both Radiohead and David Bowie have performed similar stunts recently.

Check back with us, because we'll let you know if and when The Beatles' aforementioned album launches in the iTunes Store.

In the meantime, music lovers can pick up a free single from Lorde as part of Apple's Christmas promotion. 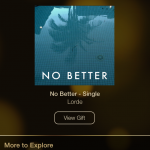 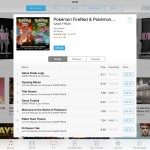 This Could Be The Closest We Ever Get To An Official Pokémon Release For Our iDevices
Nothing found :(
Try something else