You are using an outdated browser. Please upgrade your browser to improve your experience.
by Joe White
December 3, 2013
Google Glass, Pebble, Galaxy Gear. These are just a few of the wearable consumer technology products, known informally as "wearables," available in 2013, and more - including Apple's anticipated "iWatch" - are expected to arrive next year. However, if a new report is to be believed, shipments of these so-called wearables could increase by a huge 10 times over the course of the next five years. The claims come from Juniper Research, which in a recent press release claims that in 2018, shipments of wearable products could reach as high as 130 million - 10 times the collective total of Glass, Pebble, Galaxy Gear, and other similar products shipped in 2013. As such, in an increasingly "mobile" landscape dominated by the smartphone, tablet, and notebook, the mobile device of tomorrow is expected to take a radically different form. In a press release, Juniper Research explains:

The report notes that this change in adoption levels can be attributable to heightened consumer awareness of wearable technology and new product launches. It also observes that with the emergence of major players and other key stakeholders, there is a much more focussed approach towards "wearable computing."

Most wearable products available on the market center around the wrist, and these are separated into two defined product categories: the smart watch, and the activity monitor. The former category, occupied by the likes of Pebble (which we took a closer look at a couple of months ago) and the poorly-received Galaxy Gear, aims to provide elements of a smartphone-like experience in a wristwatch-style device. The second category, however, offers wristband-like products that can track users' movement over the course of the day and night. Big players in this field are Fitbit (whose Flex and Force have each served as the subjects of our product reviews), Nike, and Jawbone. It has been claimed, however, that Apple could enter the wearables market and offer a product that combines the smart watch and activity monitor in one single product. Apple chief executive officer Tim Cook has already noted that he finds the wrist "profoundly interesting," and as such analysts are anticipating that 2014 could be the year his company launches its Pebble- and Galaxy Gear-competing iWatch. Yet Juniper Research also draws attention in its press release to the other emergent wearable product: smart glasses. Represented most publicly by Google Glass, which provides users with a heads-up display (HUD) that connects to one's smartphone and delivers notifications at the side of one's field of vision, this particular product category has a few legal hurdles to clear before it can reach the market:

The report notes that there are a number of social and legal barriers to the deployment of wearable devices. However, not all of these hurdles will apply to every device, or indeed, every type of device. Issues such as privacy commonly arise if the wearable device (e.g. smart glasses) has a camera and gives the appearance of filming at all times. In the case of Healthcare wearables, the most relevant issue is the storage of confidential and personal vital health information by these devices. As more wearable products are rolled out, Juniper expects that governments will in turn seek to develop regulatory frameworks to legislate their use, both from a privacy and data protection perspective.

For Juniper Research, manufacturers will need to establish a workable platform for application developers in order for wearables to truly take off. This is something Google is indeed pushing for with the release of its Glass development kit (GDK). If Apple launches a smart watch of its own then in this particular respect, App Store integration (as part of its wider support for iOS) could be one aspect that pushes the product above and beyond competitors. However, we'll have to wait a little longer until we're certain of Apple's precise plans for the wrist. You can read Juniper Research's full report at its website. See also: Newsify Gains Further iOS 7 Optimizations, Feedly Article Images And Other Tweaks, China Mobile Pre-Registration Page Suggests iPhone Launch Could Be Imminent, and Pocket Informant Pro Updated With Global Quick Event Entry And Other Features. 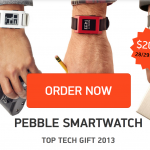 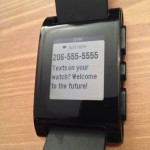 You Can Now Buy The Pebble Smart Watch From Amazon
Nothing found :(
Try something else