One of the most useful jailbreak tweaks to have reached the Cydia Store in recent months is Controllers for All. Because once downloaded and installed, this $1.99 package adds iOS gamepad compatibility to Sony’s PS3 DualShock 3 controller, allowing iDevice users to enjoy a more immersive gaming experience on their iPhone, iPad, or iPod touch at minimal expense.

Though Apple added support for MFi (Made for iPhone) game controllers in iOS 7, the products we’ve seen so far aren’t great. Costing around $100, reviews (including our own) have frequently concluded that MOGA’s Ace Power and Logitech’s PowerShell - two of the first iOS gamepads to have reached the market - fall short in a number of different ways.

Controllers for All provides iDevice owners with another serious reason to jailbreak their smartphone or tablet, however. Not only does it grant users access to a quality, well-made controller, but it saves gamers from having to cough up for another expensive accessory.

In order to set up the jailbreak tweak, you’ll need to download the Controllers for All package and then pair your PS3 DualShock 3 controller with your iDevice using SixPair, which is available for Windows, OS X, and Linux. After your controller is paired to your iDevice, your PS3 gamepad should be compatible with any MFi-enabled iOS game.

As a reminder, some of the best include Dead Trigger 2, Tomb Raider I, Grand Theft Auto: San Andreas, and Oceanhorn. Plus, if you have an Apple TV, use AirServer, or have a Lightning adapter, you can enable AirPlay Mirroring on your iDevice in order to enjoy a big screen gaming experience.

Developer Ori Kadosh promises support for further controllers, including the PS4 DualShock 4, in the near future. We’ll let you know as and when the jailbreak tweak is updated in this way.

In the meantime, Controllers for All can be downloaded in the Cydia Store for $1.99, and as mentioned, it’s optimized for the iPhone, iPad, and iPod touch.

Check out the new jailbreak tweak now, or for more of our recent news, see: Intelligent GTD App IQTELL Updated With iOS 7 Design Refresh And More Features, Today’s Best Apps: OptimizeMe And Noiseware, and Quirky App Of The Day: 8Step Tower Does Not Waste A Single Move. 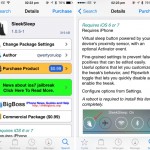 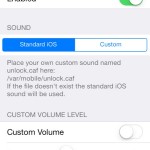 Cydia Tweak: Bring The Unlock 'Click' Back With UnlockSound7
Nothing found :(
Try something else