First there was BioProtect, then came an update for AppLocker and the release of BioLockdown. Now, another Touch ID-based jailbreak tweak is in the pipeline, and this one looks particularly interesting. Called Touchy, the package promises jailbreakers the ability to launch specific iOS applications with different fingers.

Though Touchy isn’t available yet, iDownloadBlog was able to go hands-on (or is it fingers-on?) with a prerelease iteration of the jailbreak tweak, and in a recent article it explains how the package works.

You could have the Messages app assigned to your right-hand index finger, for example, or the Mail app linked to your left-hand thumb. After everything has been assigned accordingly, launching applications using Touch ID works well, iDownloadBlog notes:

The actual process of launching apps works pretty much as you would expect. A simple tap and hold on the Touch ID sensor with a designated finger quickly launches the application associated with that finger. It’s easy to forget which apps you have assigned to each finger. For that reason, I recommend starting out with just a couple of apps assigned, and working your way up from there.

Developer Mitch Treece (@MitchTreece) has confirmed that Touchy will be available in the Cydia Store soon for the introductory price of $1.99, after which it’ll gain a small price hike to $2.99. We’ll let you know once the jailbreak tweak is available to download.

In the meantime, those of you who’ve jailbroken under iOS 7 can enjoy a plethora of new jailbreak apps and tweaks. Some of the most recent additions include Bloard, SkipLock, Share Widget for iOS 7, and CCClockOpenToAlarm. Many more, such as Touchy, are expected to arrive in the near future. 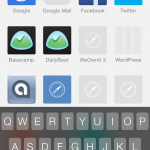 Cydia Tweak: Have Your iDevice Always Launch The Dark Keyboard With Bloard 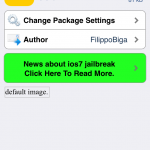