Apple is still working on an advanced television-related service, according to a recent report, yet in its current form the in-development product is said to be “less ambitious” than previously envisaged.

The news comes from The Wall Street Journal, and the publication explains that even though an upcoming television service from Apple is indeed in the pipeline, it’s shaping up to be rather different to the product the Cupertino, Calif. company had previously hoped to create.

Having struggled to secure content deals directly for its Apple TV (in a move that saw the company originally attempt to bypass cable companies), Apple is now said to be working with cable providers “to acquire programming rights from media companies,” the report claims:

Countless reports detailing ongoing content-related discussions for the Apple TV have surfaced online in recent years, yet The Wall Street Journal reiterates that Apple must now work with satellite providers (such as Comcast and TimeWarner), rather than against them, since media companies were concerned a direct deal could threaten revenue.

Apple has also toned down its expectations for the service, too, the publication adds. Previously, the company had hoped to bring ad-free access for entire TV seasons to its television service, merging live programming with on-demand content delivered from iCloud.

Now, though, it seems Apple may be forced to adopt a more standard model for on-demand TV services in the United States:

Apple’s latest approach is far less ambitious. Instead of asking for full current seasons of shows, it is asking programmers for just the most recent five episodes of current-season shows—the standard for video-on-demand services in the TV industry, a person familiar with the matter said. Apple is also proposing to disable fast-forwarding on shows for three days after they air, which would protect TV channels.

Content aside, refreshed Apple TV hardware is said to be in the cards from Apple, too, potentially arriving as soon as April and offering owners apps, games, and even a built-in AirPort Express. We’re not sure if the company’s new TV service will launch alongside its next-generation Apple TV product, or if Apple will instead launch the product with a more fully featured television set at some point in 2015.

In the meantime, see: Rescue The Girl And Don’t Die In The New iOS Platformer Game Super Obstacle Boy, Ahoy! PopCap Unfurls The Sails Of Solitaire Blitz: Lost Treasures For iOS, and Celebrate The Oscars With Ellen DeGeneres And Her Hit iOS Game, Heads Up!. 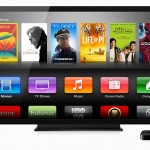 Report: New Apple TV Hardware Will Be Announced As Early As April

New Apple Job Listing Hints At 'New Platforms'
Nothing found :(
Try something else