Circular Battery, one of the latest Alkaline jailbreak themes to reach the Cydia Store, does exactly what its name suggests. Providing users with a pie chart-like indicator for their iOS device’s remaining battery life, the new package is available to download in the Cydia Store free of charge.

Circular Battery, however, indeed requires Alkaline, and if you don’t have the latter package installed, it’ll be bundled together with the new jailbreak theme. After everything has downloaded, users will be able to enable Circular Battery from within their Settings app, and after a quick respring the battery life theme should be up and running.

It looks great, and fits in with the design of Apple’s iOS really well. In fact, I think it’s a lot easier to get an accurate indication of your battery life percentage using Circular Battery instead of the stock battery life indicator Apple includes in the mobile OS – partly because we’re more used to reading pie charts, I guess.

Plus, because Circular Battery does provide a more accurate indication of one’s battery life, there’s all the more reason to remove the numerical percentage indicator and free up some space from the iOS status bar. Though Alkaline doesn’t seem to offer this kind of functionality, a handful of jailbreak packages – including the recently released StatusBarSuite – do.

As mentioned, you can pick up Circular Battery in the Cydia Store free of charge, and it requires the free Alkaline jailbreak app.

Check out the new jailbreak theme now, or for more of our recent news, see: Badland Goes Half-Price In Memory Of Fellow One-Tap iOS Game Flappy Bird, Flappy Bird Might Have Left iOS, But A New App Brings Him To The Pebble Watch, and Ladies and Gentlemen …The Beatles Are On Apple TV. 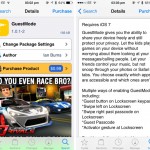 Cydia Tweak: Here's How You Can Enable A Guest Mode On Your iOS Device 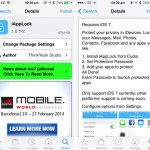