If you consume a lot of audio content on your iOS device, a new jailbreak tweak could be of use. This recent addition to the Cydia Store, which started life as a request posted on Reddit, sees an iOS device auto pause playing music when its volume level reaches zero.

It's definitely a simple jailbreak tweak, but it's one certain iOS device users should nevertheless appreciate. Called AutoPause, the package is available free of charge in the Cydia Store, and once downloaded onto an iOS device it starts working its magic immediately.

As such, users will find that with AutoPause installed, their iPhone's Music app automatically pauses the current track if its volume level reaches zero. The downside is that the feature is limited to the physical volume keys (and isn't hooked up to the virtual slider), but it nevertheless works well.

Upon turning the volume level back up from zero, AutoPause sets the Music app off playing the track it had previously paused. It's as simple as that.

As noted above, AutoPause was originally requested by a Reddit user, and a kindhearted developer took on the challenge of creating the jailbreak tweak. If you're a jailbreak fan, the jailbreak section of Reddit – /r/jailbreak – is definitely worth stopping by, especially if you have a tweak idea that you'd like to see created!

For Music app users, AutoPause can be downloaded now in the Cydia Store, and as mentioned, it's available free of charge.

Check out the new jailbreak tweak now, or for more of our recent news, see: Forget That Other Photo Booth For iPhone Port, Because This Jailbreak Tweak Is Better, After A Short Delay, The 'Amazon TV' Is Set To Launch Next Month, and Help The Rainbowers Get Their Rainbow Fix In This New Colorful Match-3 Game. 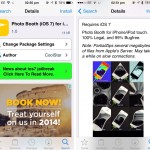 Forget That Other Photo Booth For iPhone Port, Because This Jailbreak Tweak Is Better 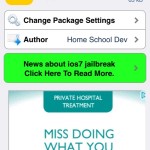 Cydia Tweak: IconLock7 Stops iOS Icons Being Moved, Deleted Under iOS 7
Nothing found :(
Try something else