TouchBar is a new jailbreak tweak that brings a bunch of iOS system options – including toggles for Airplane Mode, location services, and Bluetooth – to the iOS status bar. You can pick up the package for $0.99 in the Cydia Store, and it’s optimized for iOS 7.

Once you have TouchBar installed on your iPhone, you’ll be able to invoke a selection of system options which appear at the iOS status bar. This can be done either by tapping the status bar, or by assigning an Activator action to TouchBar using the free jailbreak app.

Functions including (but not limited to) Airplane Mode, Do No Disturb, Wi-Fi, Bluetooth, and location services can all be enabled or disabled using TouchBar, and the selection of toggles presented by the jailbreak tweak can be customized by users.

In terms of appearance, the jailbreak tweak looks nice and fits in with the design ethos of iOS 7:

However, I’m not sure this is a package I’d be inclined to install on my iPhone. Control Center provides an ultra-convenient means of accessing system toggles under iOS 7, and though limited by default to a handful of options, a growing number of jailbreak tweaks are expanding on the feature’s functionality in new and exciting ways.

As mentioned, TouchBar is available to download now in the Cydia Store. How do you like the look of the new package?

See also: Auxo 2, Sequel To The Popular Jailbreak App Switcher, Is Coming Next Month, Cydia Tweak: SpotiSearch Brings Spotify Searching To Spotlight, and Threes! Gets ‘Next Card’ System Tweak And Other Improvements In First Update. 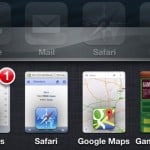 Auxo 2, Sequel To The Popular Jailbreak App Switcher, Is Coming Next Month 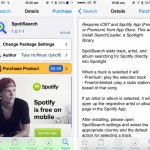 Cydia Tweak: SpotiSearch Brings Spotify Searching To Spotlight
Nothing found :(
Try something else