Surgeon Simulator, the 100 percent “medically inaccurate” game from Bossa Studios, is indeed iOS-bound. Now, however, we’re hearing from the developer that besides featuring its anticipated, gore-laden array of body- and even teeth-based operations, Surgeon Simulator’s iOS port is set to include eyeball surgeries, too.

If you’re a fan of Surgeon Simulator, we’re sure this’ll come as great news; for others who are new to the game, the information could perhaps turn your stomach over a couple of times. Bossa confirmed the unexpected game mode in a recent YouTube video, and in the video’s description, the developer explained:

We asked what operations you wanted to see in the game, this is what you said …

Here’s the video – see what you think:

http://youtube.com/watch?feature=youtu.be&v=qB9EkP8xREE&desktop_uri=%2Fwatch%3Fv%3DqB9EkP8xREE%26feature%3Dyoutu.be If you can’t see the above video, please click this link.

Specifically, the game – called Surgeon Simulator - Malpractice Makes Perfect – will be an iPad release, and it’ll be available to download in the App Store “soon,” according to Bossa. The game is already available in a slightly different form for desktop computers (Windows, OS X, and Linux), and you can pick up the title through Steam.

Malpractice Makes Perfect adds a touch-based control system to the app, along with a tooth-pulling mode and the aforementioned eyeball operations. Are you excited to play eye doctor on your iPad? 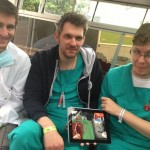 Over-The-Top Simulation Game Surgeon Simulator Could Launch For iOS
Nothing found :(
Try something else