Cupertino residents have received another letter from Apple detailing the development of its Campus 2. In the letter, Apple explains how the ongoing construction is going to pan out over the course of the coming weeks, and it’s penned by Dan Whisenhunt – Apple’s senior director of Real Estate and Development.

The full text of the letter is included below (via AppleInsider); the main points concern the relocation of public utilities and the beginning of earthwork on the campus, which is scheduled to commence next month. Apple also noted that it’s providing updates through a special City of Cupertino Web page.

I wanted to update you on construction activities for Apple Campus 2. We are now wrapping up demolition of the old buildings on site as well as public utility relocation and roadway construction along Tantau Avenue and Homestead Road. We ran into some unforeseen underground conditions the delayed the utility relocation process, however we expect this work to be completed in the next few weeks.

I also wanted to let you know that, as Homestead and Tantau are reopened, Pruneridge Avenue will then be closed. We currently anticipate the Pruneridge closure by mid April, but it may be as early as April 4th if the weather holds. Please continue to monitor construction signage in the area for the specific day Homestead and Tantau will re-open Pruneridge and will close.

We expect additional work on portions of Tantau and Homestead in April and will continue public utility work on Wolf eRoad through the spring and early summer of this year. Once the utility work in the public streets is complete we expect less construction disruption as the vast majority of work will be directly on the project site. We are planning to commence earthwork and construction activity on site in April and currently anticipate occupancy in late 2016.

The City of Cupertino has established the Apple Campus 2 Construction Update webpage at www.cupertino.org/appleconstruction. The webpage provides information on vehicular, bike and pedestrian routes lane closure, construction timelines for various activities and other information. The website is updated each Friday so you can visit the website to learn about upcoming construction work.

As always please feel free to contact us if you should have questions or concerns.

Earlier this week, a video surfaced online showing part of last year’s demolition of old HP buildings. Published from an account called “Apple Internal,” it was subsequently removed “due to a copyright claim from Apple, Inc.” Soon after, however, images showing construction of the campus in detail hit the Web, and we shared these with you yesterday.

The new campus was first unveiled by Apple co-founder and then-CEO Steve Jobs in 2011, and the company gained final approval to build the campus from the City of Cupertino in November 2013. The building features a 120,000 square foot auditorium and will host Apple’s WWDC keynote, along with its annual iPhone and iPad events.

Whisenhunt’s letter again notes that Apple is aiming for a late-2016 move-in date. We’ll keep you updated with further information as we receive it.

In the meantime, see: Judge Gives The Go-Ahead For Class Action E-Books Suit Against Apple, Could This Be The Display Apple Uses In Its iPhone 6?, and BlackBerry Wins Patent Ruling Against Ryan Seacrest’s Typo iPhone Keyboard Case. 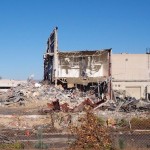 This New Campus 2 Video Shows The Demolition Of Old HP Offices
Nothing found :(
Try something else