Construction of Apple’s futuristic Campus 2 is well underway, and now a new YouTube video has provided an insight into last year’s demolition of the site’s old Hewlett-Packard campus buildings.

Apple received final approval to go ahead with the development of its new campus in November, and in both December and January images showing construction work on the so-called “Campus 2” surfaced online.

However, the aforementioned video now provides more of an in-depth look at the old HP campus’s demolition. It reached YouTube some hours ago and was uploaded from an account called “Apple Internal.”

Campus 2 was originally proposed by Apple co-founder and former CEO Steve Jobs in June 2011, a mere few months before Jobs died in the following October. The new building, sometimes referred to as the “spaceship” campus due to its UFO-like design, will feature a 120,000 square foot autitorium and will host Apple’s future media events.

Presently, Apple’s WWDC conference, its September iPhone event, and its October iPad event all require a trip to the Yerba Buena Center in San Francisco.

Campus 2 will also source 70 percent of its energy from solar and fuel cells, and the first phase of its construction is expected to be completed in 2016. 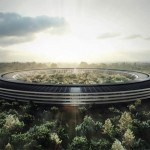 New Photo Shows Demolition Work At The Site Of Apple's New 'Spaceship' Campus
Nothing found :(
Try something else